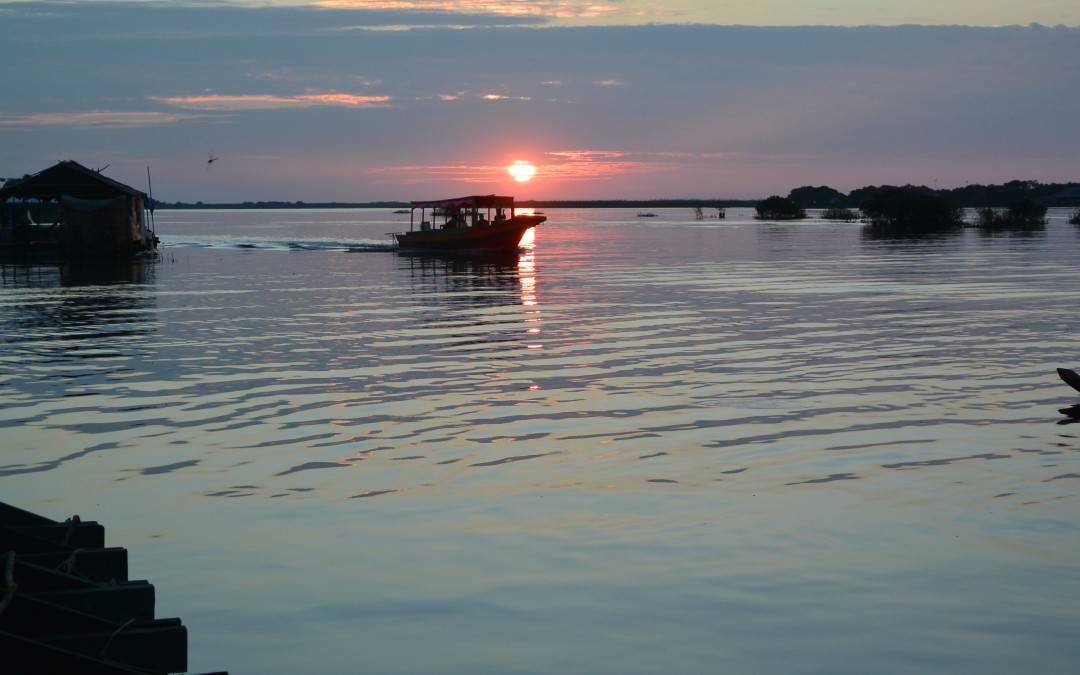 Vans, big motorboats, little motorboats, kayaks, bicycles, trains and taxis all had a part to play in our adventure on route from Siem Reap to Battambang. Overnight in the floating village of Prek Toal and the flooded forests of the Core Bird Reserve. Across the floodplains of the Tonle Sap Great Lake and up the Sangke River through the lush rural countryside of Battambang Province to the centre of the farming town in twenty four hours and a bit.

The expedition started at the boat station near Maichrey floating village, where Mr Heang and Finfoot, our comfortably converted fishing boat were waiting. The water was still high enough for us to cross the flooded scrub where we moored to a submerged tree. Lena and Seb were apt pupils as I explained the hydrological phenomena of the Mekong River system until I was rudely interrupted by a virulent green pit viper wrapped around a branch overhanging the deck. 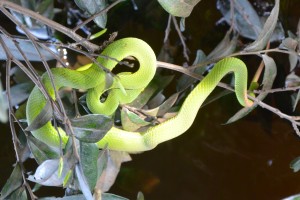 Pit Viper in tree beside boat

The afternoons adventure was to explore Prek Toal floating village and the surrounding flooded countryside by kayak. The police chief took photos as we paddled past his station, children came out to stare as we floated by their houses, while those who were working ignored us.

Our improvised route went between the blackened trunks of flooded trees, under their dense green canopy and emerged beside the floating Catholic Church. We crossed the channel to where a muscled boy was ladling fish into piles in front of squatting ladies who chopped them up with meat cleavers, making a pulp that would ferment into Prahoc or Khmer cheese. So named because it stinks. 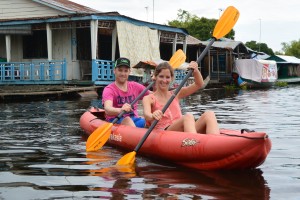 Seb and Lena setting off from their homestay

We watched the sun – a blood red orange, set over the Core Bird Reserve from the watchtower on top of the environmental research station, then motored over to the Saray Platform for supper. 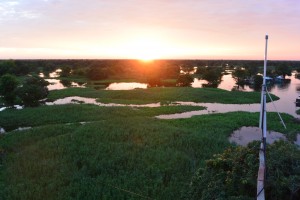 Reflections twisted by the wake of motorboats, a cool breeze playing over the boat’s spume.

Hosing the prahok tables ready for tomorrow. Alien clumps of hyacinth drifting on the water.

Cotton wool fluff of half seen cloud and the glare of a television set as we came close to people’s houses.

The women weavers on the water hyacinth workshop had gone home but their piers were cooking us a supper of fish, vegetables and fruit with rice and a good bottle of chardonnay to wash it down.

Swinging in a hammock in Veasna’s house our home for the night. Manus hid a lime in Baby Buntha’s nappy. His sister heaved the heavy little lump across the floor. The Mother in Law busied herself with not much. The Grandmother on all fours played with the baby. Little sister went skipping to her mummy then wrapped the baby in plastic, all the while pool hall play by the lads in the village. Hide and seek by the water jar, doubled up Grandmother.

Streaky orange lighting the village as the first long tails cacaphonic clatter echoed across the water, the old lady hawked, the batteries ran out on the night lanterns. We awkwardly crossed the tilting boats to the pool hall barge to meet Heang, who took us for breakfast back at the Saray Platform. 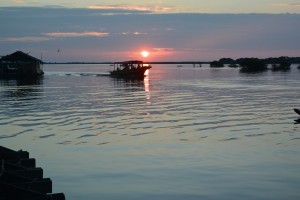 Bunhoeurn was waiting in the community boat for the ride into the magical landscape of the post dawn flooded forest. The light of the warming sun reflected by the delicate yellow flowers of floating saray plants. Squadrons of cormorants flew in slip-stream formation. A profusion of black and white; Oriental darters mixed with egrets, pelicans riding the thermals like galleons in the sky and the bird colonies. Avian cities built in the tallest trees.

Back in the village by 9am our journey into the heart of darkness (actually lush, pastoral Battambang) began. 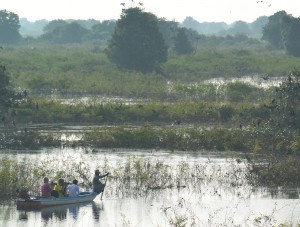 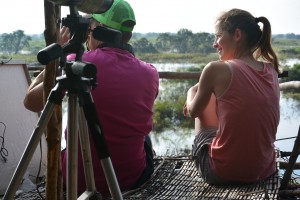 The waterway was fringed by hyacinth and undulating green margins of scrub with the occasional hamlets of floating houses or shacks tied to trees. The first proper village was Kampong Prahoc, which sort of translates into waterside place of good fermented fish paste. I wouldn’t want to be there when the water is low and rotten fish undiluted!

After an hour or so we began to get an idea of how vast the floodplain is. Over 40 kilometres wide where the water rises and falls by 10 meters submerging all but the tallest trees. In the floating villages along our route the only permanent constructions were pagodas on stilts.

Around a bend and Wat Cheu Khmao or temple of the black wood, came into view like a Burmese monastery with a beautiful modern pagoda framed by sugar palms behind. It was built in 1944 copying the Bayon Temple in Angkor and completed with Loksvara, the smiling faces at the cardinal points but they were blamed after accidents and disease struck the village then removed. 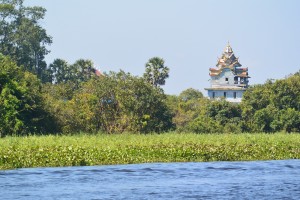 The salapali or space for teaching of Wat Cheu Kmao

Great clumps of yellow green bamboo towered over the floating houses. The stems are harvested to provide the floating platforms on which the villages are built.

A regal Grey-headed fish eagle on guard beside its nest in a tall tree, while on a lower branch a hunched up night heron the servile vizier to the magnificent bird above.

We passed a tacky tourist lunch stop as bad as any bus station for the back packers crammed inside and on top of the fibreglass tourist boat. 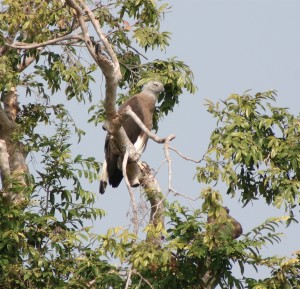 A single file short cut through the scrub, stopping for long tail boats loaded with beer and rice and wooden boats with giant water jars. We emerged onto an open plain where the trees had been cut down. Home to a transient people living on their small house-boats or shelters on the river bank as the water receded. Strange pivoting bamboo fishing nets were lowered into the water then raised revealing a whicker basket tied to the bottom to trap the fish. 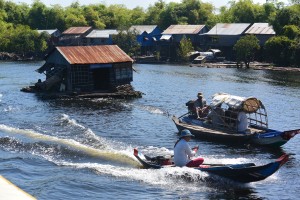 A fat pelican sat on the porch of a floating house. An unhappy monkey ran around on a chain in the full sun on a bamboo fishing platform and a full grown otter seemed ok as it scampered round the girl who held it’s leash. 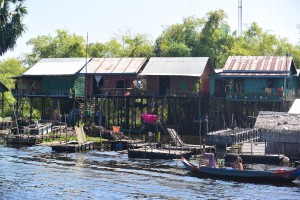 Telephone masts were visible in the distance. Riverbanks rose above the water and motorbikes parked beside houses. We’d reached the upper Sangke. 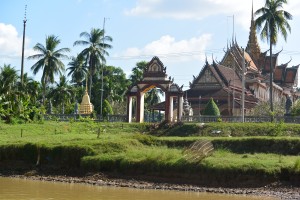 A pagoda on the riverbank not far from Battambang

Lena and Sebastian safely delivered to their garden enclave in Phum Wat Kor upstream of the town, I breathed a sigh of relief as the extra hot, double shot latte created by Chenda was placed on the little wooden table in front of me at Knyei Cafe.

Weddingitis had infected the town and the Seng Hout Hotel where we’d booked to stay had a particularly virulent attack so we kept on going to find another bland box like building with half the Cardamon Forest used to make the furniture but ice cool rooms with no aesthetic distractions to sleep.

Day 3 The Battambang bicycle tour of the city with San. 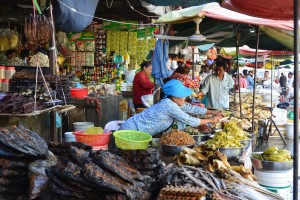 We crossed the quayside and down the dry banks to the ferry man who took us across the river to the monk school at Bovil Pagoda. 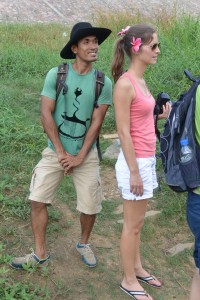 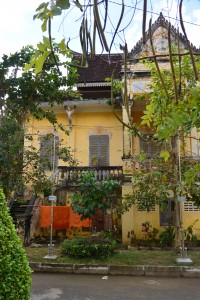 Singing rang out from the Catholic Church, which had the enthusiasm of an American black baptist congregation not the stilted formality of a Catholic communion. Time was getting short and the Bamboo Train beckoned so we had to forgo the black man in the middle of the road, another of Battambang’s attractions.

Giant wood spiders had weaved their webs over the rail tracks. The view extended across bright green rice fields to Phnom (hill) Sampeou in the distance.

A one-way system, lift off the bamboo platform, remove the axles and let the oncoming norrie through before putting it back together again. 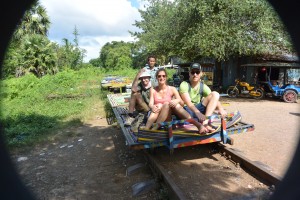 Nick (left), Lena & Sebastian on board a norrie