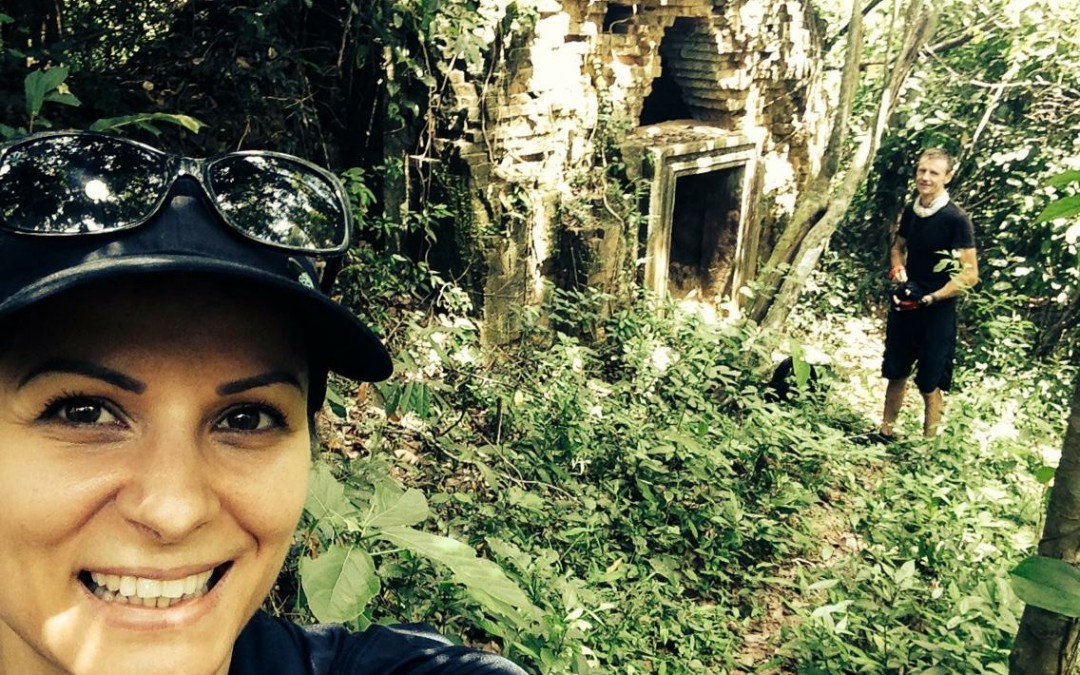 Temple Hunting in The Angkor Countryside

The countryside surrounding Angkor is one of paddy fields and sugar palms. Dotted with small villages of traditional wooden houses built on stilts surrounded by fruit trees. Trapaeng or pools, vast ancient baray or reservoirs and the rivers and channels that still connect the ruins of ancient temples shape the landscape. Near Siem Reap it’s flat excepting the isolated Phnom (hill) Bok that serves as a compass to weary cyclists (and incidentally gave Jayavarman V an excuse to build a temple on top). 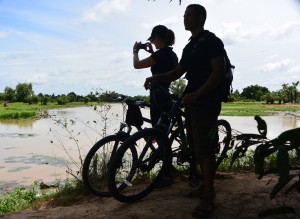 Lors and Zsuzsa looking out over the dam

Small sandy paths and red earth roads have been usurped by the new Korean ring road that speeds oblivious tourists to Banteay Srei or Citadel of The Woman, North of Angkor. Heads down and legs pumping we ate the Tarmac on our escape from the clutches of tourist town in search of temples. 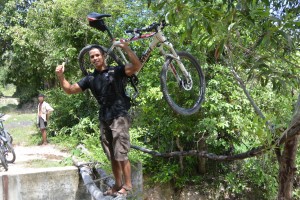 Lors showing off on the rickety bridge

It was cheating slightly as a few weeks back we’d recce’d the ruins on dirt bikes with Dave the helicopter pilot who’d plotted them from the air. Our mission today was to find a path between the ruins and the West Baray, where many of our mountain bike rides finish. Google Earth had made it look easy but I made it hard, leading Lors and Zsuzsa along a track that finished in a ploughed rice field. ‘Boss listen to me, I know the way,’ Lors implored. I didn’t so we followed him and found the first landmark we were looking for, a dam across the Siem Reap river. 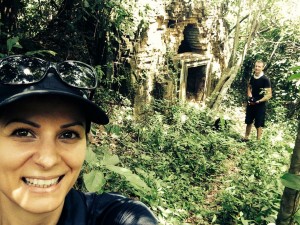 Not really a dam more a muddy earth wall broken by a concrete sluice and a couple of poles that served as a bridge.

A perfect pastoral scene was set in front of us. Farmers tilling their land with buffalo or their mechanical equivalent, kroyun – a sort of hand held tractor. Ladies up to their chest in the small lake formed by the dam gathered lotus flowers until gazing at three barangs cross a rickety bridge became too enticing, especially when one of them, me – fell in.

‘It’s just here Boss.’ Unfortunately Lors was right. I was going to have to pass on my Chief Exploration Officer title. An isolated patch of forest lay in front of us. Zsuzsa and I twisted our way through the tangle of vines and thorny branches into a gloomy clearing surrounding the ancient ruins of Prasat Sra Laos. A conical brick tower on top of a sandstone lintel and doorway. I looked inside to see if there were any bats.

Back at the bikes Lors had made friends with a a couple of happy rice farmers who’d given up on ploughing the paddy fields in favour of rice wine. We zigzag’d our way across the countryside on paths between rice fields, through bush and small patches of forest. Picking up sandy tracks all in vaguely the right direction. ‘How do you know the way Lors? This is amazing!’ I exclaimed. ‘I lucky, just find the right route,’ he glibly smiled (he’d checked out the route the day before). 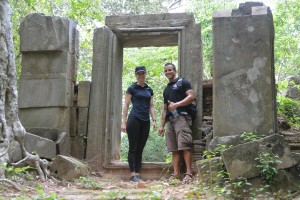 In front of Prasat Cha, Sanscrit is carved into the inside of the stone doorway

Tall tree’s are valuable, there’s not many left outside the protection of the Angkor Park. Tall trees near ruins though are inhabited by spirits that are best appeased and not pissed off but cutting their home down. Google can show you where the temple should be but it’s the trees that give away where it is.

Prasat Cha was no exception. Unlike Prasat Sra Laos the shade kept the undestory at bay and created an enchanting glade around the artificial mounds on which Prasat Cha was built. The towers are made of brick & laterite, the doorposts (as shown) of sandstone richly ornamented with Sanskrit inscription, which dates back to the 10th century and Jayavarman V. A lot of what we know today about the Angkorian Empire has been learnt from just such carvings, which while mainly describing the temple and who built it give snippets of fascinating information. Or so I’m told – I don’t read Sanskrit, which is just as well as there’s a local story that tells of a five-headed dragon that confronts anyone who reads.

The rest of our way followed well worn paths we knew well, that is that until we reached a new channel cutting us off from the West Baray. We hoisted the bikes on our shoulders and filed across the big muddy ditch to the walls of the Angkorian Reservoir. 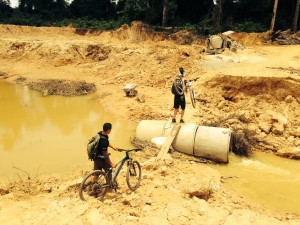 Our last challenge before the Baray.

Eight by two kilometres with no geographical help from a valley or hill, the West Baray was until the 20th century the largest entirely manmade reservoir in the world built a thousand years ago at the beginning of the 11th Century.

Unfortunately The Amansara Food and Beverage Team were not there to meet us with cold towels and iced lemonade, cold beer and lunch boxes. Instead we made do with lukewarm Kulen water 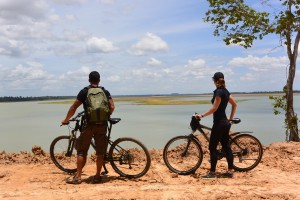 Looking out over the West Baray.

Nick and Buntha are delighted to take guests exploring the local countryside by mountain bike or hiking. Discovering hidden temples where our cold beers and lunch boxes will be waiting.