In Search of a White Elephant 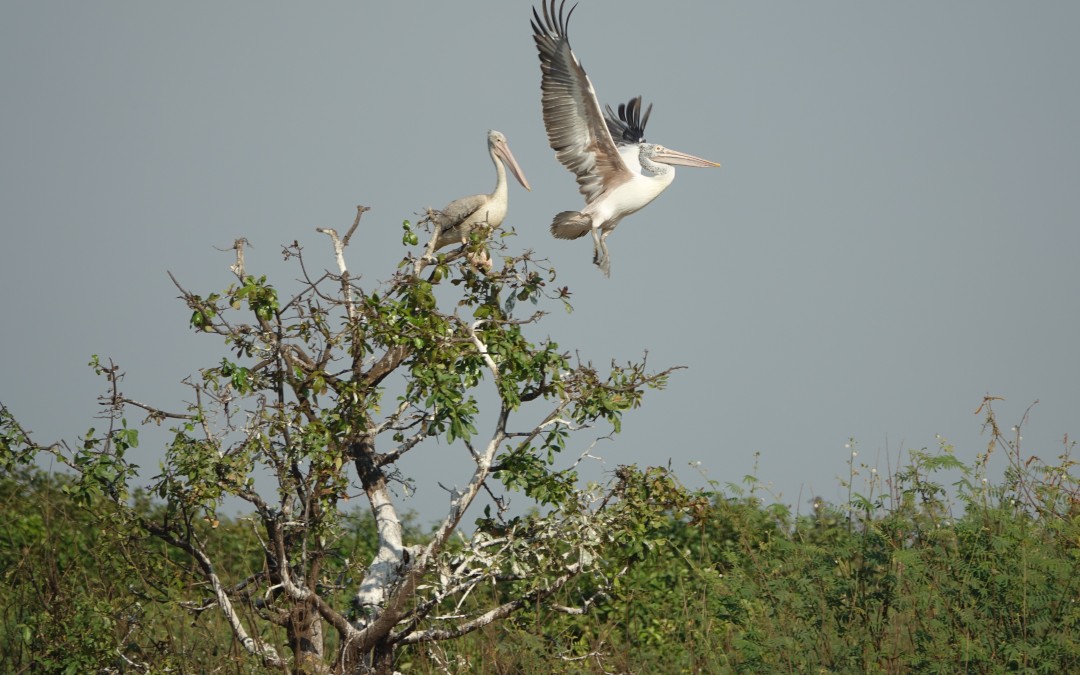 In Search of a White Elephant

Our quest for the day was to find Boeung P’Rieng, a lake amidst flooded forests on the edge of The Great Tonle Sap that is subsumed when the back flow begins and the water levels in the lake rise.

Previous attempts had started in much the same way though today was Wednesday so it was Sister Srei not Little Red Fox, where we congregated for the essential injection of caffein before setting off on our quest.

The first try was thwarted by 2 flat tyres and a serious compromise in a sense of direction. I emerged from the forest beside the tourist boat channel at Chong Khneas no where near Boeung P’Rieng or nearby Chreav Village. The second attempt got closer but we reached the trips zenith in the corner of a big rice field where it met the channel leading to Boeung P’Rieng, a local family told us.

This morning’s adventure was a more serious affair; Buntha, Lors and I were joined by Bo our ubiquitous boatman and Mr Ly, the managing director no less of the Chreav Village Information Centre. In his spare time he had taken on the role of promoting the lake as a possible source of employment for the Chreav villagers in who’s commune it is situated. We assumed this might mean he knew where it was. 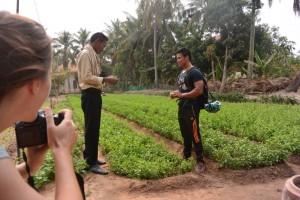 Lors, our guide receiving the tour guide treatment from Mr Ly, director of the village information center with Taylor behind the camera

As part of the party political broadcast we were taken to a well managed market garden in a pretty part of Chreav village where basil and other herbs were grown. An oxcart was included in the agenda but our bicycles gave us the excuse to continue in our search of the elusive lake. 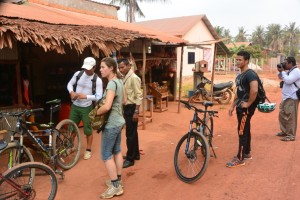 Bo’s plans for differentiation in the tourism industry became evident as Taylor and I became his unwitting models when we cycled between paddy fields behind the plume of white dust thrown up by his motorbike.

Our cares started to slip away as the horizon stretched to the distance. We spotted sandpipers on the moist earth and a Pied Kingfisher over the irrigation ditch. Two pranticoles skulked amongst the rice stubble. The impenetrable bush revealed when the Tonle Sap recedes had been cleared to make a path to where we assumed the lake would be. 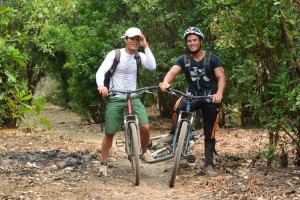 Buntha and Lors cycling through the seasonally flooded forest

Circling pelicans soaring high confirmed that third time lucky and after a patch of proper forest we met our welcoming committee and The Lake. 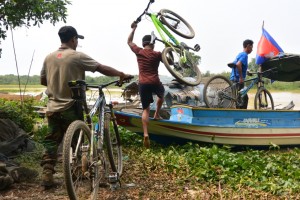 Five years ago Bo had tried to persuade us to send bird watchers to what was designated a fish conservation area, hence the birds but as with many a well intentioned project in Cambodia, the fishing rights to the fish protection area were sold. 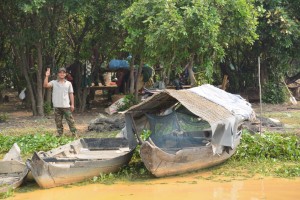 And setting off to explore the lake 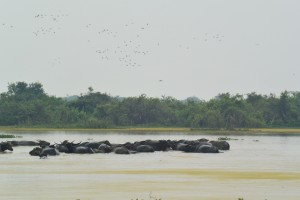 Mr Ly according to Mr Ly was now the lakes protector and the fishing traps hauled out of the water and piled high to be burnt suggested that this time it might be more than words. 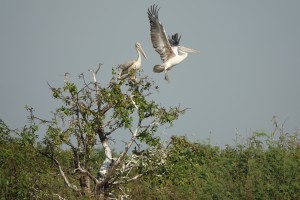 Spot-billed Pelicans taking off as we get too close

The community protected area covers 300 hectares and the lake itself twenty though that must change by the day. As we nosed our way through the sage green algae the scale was hard to fathom. Pools were funneled through channels to broad expanses of muddy suspension where buffalo wallowed pecked clean of ticks by white egrets, a prefect focal for a photo that never happened as they flapped off before I could press the shutter. 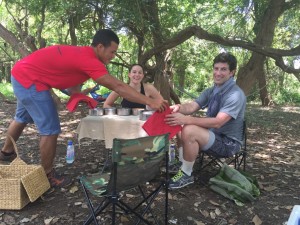 A cool forest lunch-spot for our guests

Bo’s enthusiasm for the birds was infectious as we struggled to keep up with the calls of new
species; Black-headed Ibis, Open-billed Storks everywhere, Painted Storks, prehistoric pelicans sailing like galleons, cormorants and a Grey-headed Fishing Eagle lazily flew off as we entered a new lagoon. Above all were the great flocks of duck, Spot-billed and Whistling, more than we’d seen at Prek Toal and only compared with the reservoir at Ang Trapaeng Thmor.

Our destination proved to be a patch of cool forest with a clear understory shaded under the canopy, the perfect lunch spot after a mornings meandering by kayak. 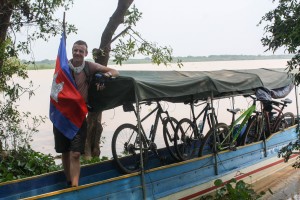 I remembered that we had been able to drive our motorbikes here but now the route was cut by the channel that offered our only way out. Our impressively muscled boatman manoeuvred us along the twists and turns of the waterway between the trees and pushed our path through the congregated water hyacinth. 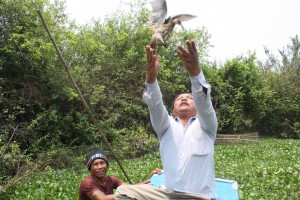 Something fluttered in a fish trap. A bird was caught in the cage. Bo’s good at this and confidently reached in and pulled out the distressed Water Cock, which calmed in his hands.

In quasi moment of religious release he cast the creature into the sky to regain its freedom, whereupon it nosed dived into the next fishing trap. There was a happy ending as it swam off underwater. 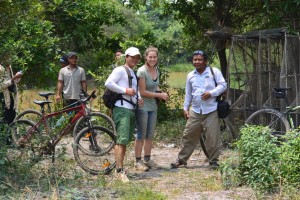 Disembarking from the Water Hyacinth Channel 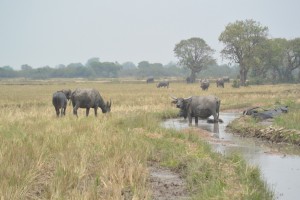 The Floodplain around Phnom Kraum now a buffalo haven

Somehow Bo’s motorbike was where we disembarked then I recognised the community member who’d said goodbye and figured it out!

We set off across the dry paddy, which even in these dry El Nino years will be a meter under the flood in 4 months time. Where there was water the buffalo wallowed. I racked my brains to remember the path we cycled on.

Surely I’d been here? We’d turned off too late, it dawned on me as we crossed a bridge over the Siem Reap River on its way to Phnom Kraum and Chong Khneas, the ugly tourist port.

Next was a promotional detour engineered by Bo, who sort of seemed to be taking over the day. A new homestay venture complete with wi-fi and a bar. Surely that makes it a guesthouse? I thought but obviously Bo reckoned that business lay with a homestay and the activities there with as now modeled by Taylor and Nick. 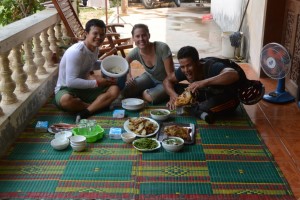 Recharging after the morning’s exertions

More to the point and definitely on cue, Mr Doitch an Indochine Exploration driver had cooked us lunch, chicken and cabbage, chnang! (delicious).

Boeung P’Rieng is a birding spectacle on the scale of the world famous Prek Toal 15km as the adjutant flies to the South. And a testament to the work of My Ly and his community members in enforcing the protection of the fish conservation area that attracts the birds.

Indochine Exploration is pleased to support this project with an out of the world adventure combining combining bikes, boats, birds and a paddy field Jeep tour (pulling apart a chicken carcass is optional).