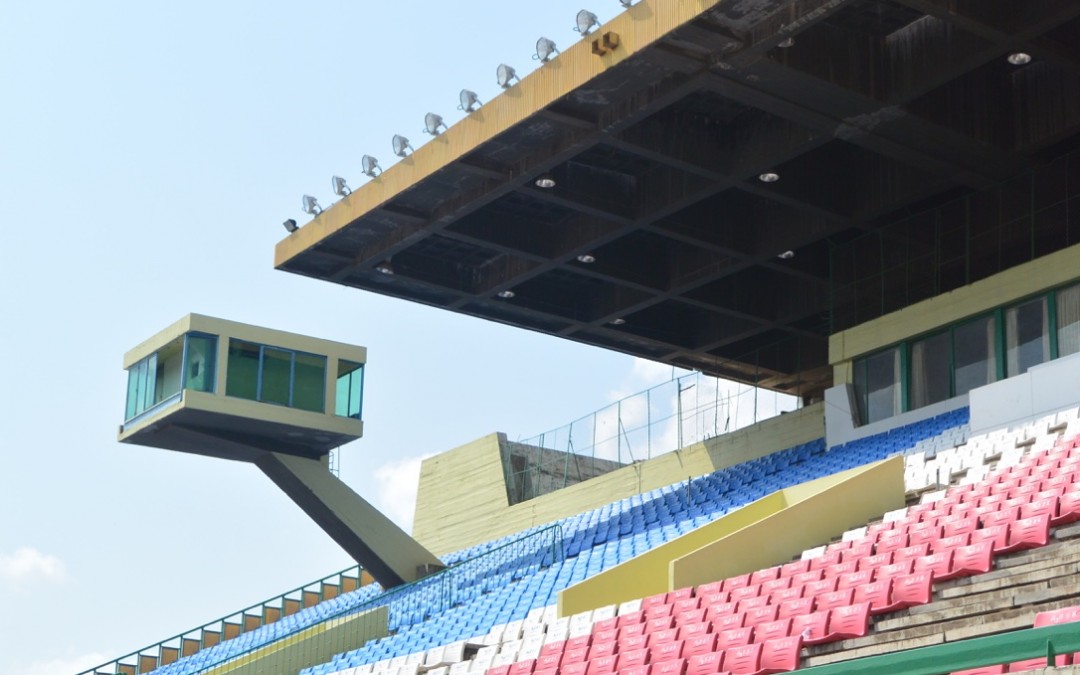 Architecture was part of a new exuberant and modernistic Khmer movement encouraged by King Sihanouk and expressed in music, dance, film and architecture, not seen in neighboring parts of Indochina when Cambodia gained independence in 1953. The movement lasted until Sihanouk was deposed by Lon Nol in the 1970 coup, which heralded the start of the civil war.

Vann Molyvann was foremost among the city’s architects during this time, designing nearly 100 public and private projects. He’d studied in France and drew inspiration from Le Corbusier and his five principles of design, most of which can be seen in traditional Khmer wooden houses.

The five principles being;

Together with the UN expert Gerald Hanning, he advised the King as to how the city should be developed.

The first floor is larger than the ground floor providing shade below in a style of passive protection, while the whole building is raised on columns from the ground as with traditional Khmer architecture.

A polygon roof separates the working space from the glare and heat of the sun and channels the breeze giving a natural cool. Vertical panels provide shade to the interior 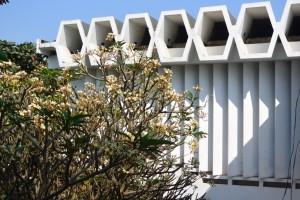 The building is orientated to shade the stage and those inside who can see out and those outside in, connecting them by visualization.

The ground floor as with traditional Khmer wooden houses was open though now outside walls have been added on some of the buildings, somewhat of a design travesty but the Ministry of Education doesn’t speak to the Ministry of Culture. 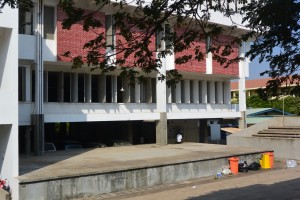 Arial walkways over pools connect the different buildings offering a view over the forty five hectare campus and shelter from the rain and sun underneath. They give an example of how Molyvann incorporated Angkorian design, which uses bridges to cross the temple moats. He even finished off the handrails with nagas or snakes.

The four lecture halls appear as jumping frogs creating a sense of dynamism, while the double walls faced by brick divert heat from the laboring students inside. And sculpture not painting is used to play with the shadows. 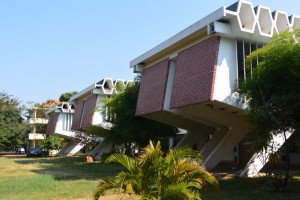 The library (not shown) is shaped like a Khmer straw hat, where outside columns support the building with no structure inside. The gutters act as fountains falling into a surrounding pool cooling the building without the need for air-conditioning (in case of the library aircon was used to control the humidity). A Le Corbusier inspired style called ‘brise soleil’ seen in Chandigargh India, where the walls are protected from the wind, rain and sun, was also used by Molyvann. 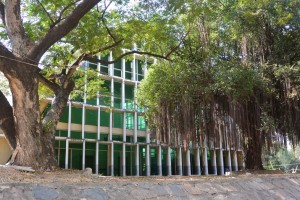 The conference hall, not designed by Molyvann, is a parabolic shape supported from outside and traditionally open sided which killed the sound and allowed a breeze. Now the sides have been filled with glass it has to be air-conditioned and there’s an echo to even the smallest sound. 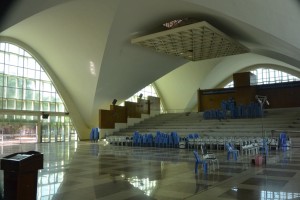 There were air vents in the ceiling to further cool the space but they have been covered. There’s a mistake in the orientation of the hall as it faces South West catching the sun unlike the Institute of Languages. 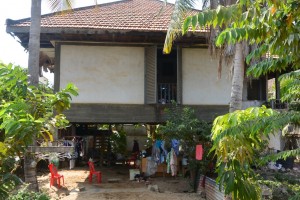 The design incorporates that of a Khmer wooden house and modern architecture. The houses appear to be randomly orientated but are actually carefully laid out to maximise the view and space.

The open space underneath is important providing an area for shelter and storage like a traditional Khmer wooden house and there’s an Angkorian style pool in every garden. There are 2 staircases, one into the living room and a back stair to the kitchen and the WC so guests would avoid the smell and traipsing through the house. Unlike most Khmer houses Molyvann designed big windows the size of doors for ventilation and light.

The main columns are made of concrete not wood as are the beams between them. This is so the thickness of the beams can be increased and the span widened, allowing more space. The roof is like a policeman’s helmet raised above the walls and channeling any breeze from outside in.

In 1975 the estate became a military camp and every house got a number. After the civil war the Vietnamese Air Force took them and in 1986 they were given back to the people. Today most are being demolished or altered as land becomes increasingly expensive. 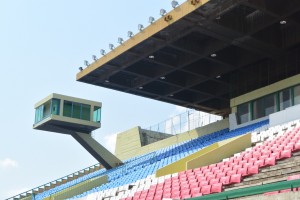 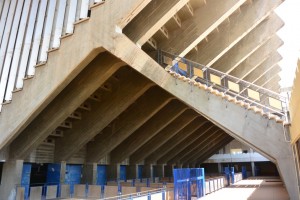 The building was Angkorian inspired and became known as the second Angkor Wat consuming most of the national budget in its construction.

The materials excepting aluminum panels were all Cambodian. As with Angkor Wat the indoor stadium is surrounded by pools fed from gutters. 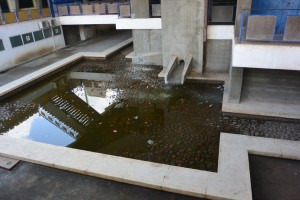 External stairs allow for a speedy and non claustrophobic exit. There are no walls as such just tiers of seating surround the auditorium, each seat has an open space underneath providing cooling ventilation to the entire area. The ceiling is supported by 4 columns 2 meters wide, 25 m high allowing a span of 32 m resembling a square mushroom. The ventilation allowed a breeze and light to get through during the day and the building to glow with light at night. 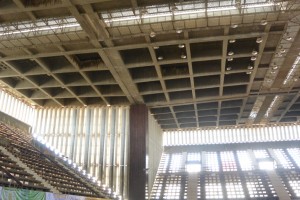 As you leave the indoor stadium you pass under a low ceilinged corridor, the contrast with the vast space of the 70,000 seat outdoor arena is stunning. As Frank Lloyd Write said detail is the key, this can be seen in all of Molyvann’s designs and the Olympic Stadium is no exception. Originally covering a 24 ha site the different aspects of the complex mirrored each other, while the 4 towers on the roof of the stadium provide orientation around the 4 cardinal points. 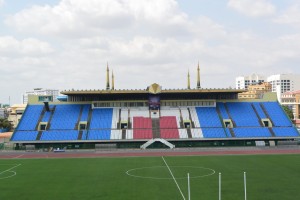 View across the pitch to central auditorium, Royal Box and VIP seating with towers at the 4 cardinal points

The elevation of the stadium is the same as Angkor Wat’s and allowed the seats facing East to towards the river to see the Royal Palace. It was built up using the soil from the pools surrounding it, saving money on concrete and speeding up the construction process.

The National Stadium is now under threat and on the World Monument’s Fund watch list. Much of the original 24 ha has been sold for development, the original buildings demolished and construction has started on skyscrapers. There’s talk of a new Chinese funded national stadium on the outskirts of the city, which will increase the pressure to release what is now valuable land.

Phnom Penh can be overlooked in the rush to see the temples from Siem Reap but this Vann Molyvann focused architectural tour along with others concentrating on religious and colonial architecture are a good reason to extend your stay by a night or two.