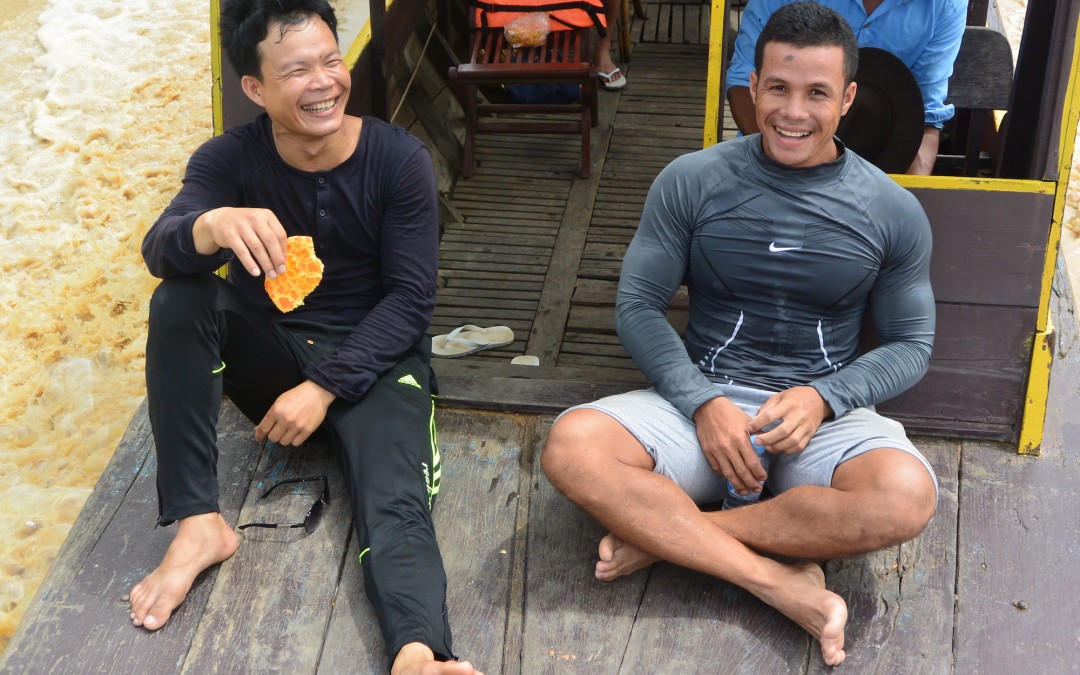 Heang was waiting at the Maichrey Boat Station with what looked liked the oldest wooden boat Bo the owner could find. The Team sprang into action, had the kayaks out the car, inflated and up on the roof of the relic that was taking us into The Tonle Sap Floodplain. I watched redundantly and remembered when it was only me that could set them up correctly. 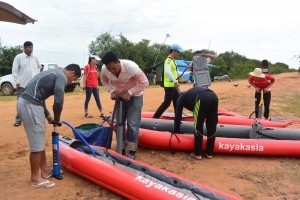 The Team setting up the kayaks (left), Buntha & Lors (below) 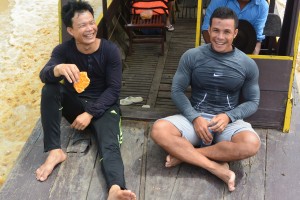 The lake is on the flood penetrating up the waterways that for half the year flow in the opposite direction and with the current comes the clumps of water hyacinth. A weed introduced from South America that floats on air sacs in its stem and was enemy No 1 for the day.

The same floating house that we saw yesterday on a customer trip was still stuck half way up the channel. Four young boys in a sad shack that didn’t look like it would make it through the next storm.

For once the mind numbing long tailed engines served a purpose cutting a path through the floating weed that unless you nose tailed perilously close to the churning propeller, fused back together after the long tail had made its way through. 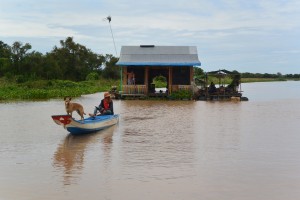 Moving house as The Lake fills

We launched our kayaks over the side of Heang’s boat and headed off into the unknown, flippantly and later regretfully I mentioned ‘to get lost.’ ‘Keep with us,’ my futile call went unheeded. Lors with his shirt off like some smooth gorilla together with Jin, who’s just so nice, paddled off. Bunthy and Ra, Buntha and Sreymom plus me solo, which with these fit guys puts me behind.

A little way past Maichrey we met our first water hyacinth barrage, easy as we followed the long tail through the chopped weed. 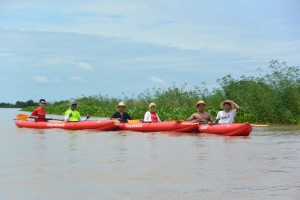 The Team in the open channel

Like ginormous birds the A320’s circled overhead waiting to land at REP Airport as we struck up a rhythm in our kayaks along a wide channel. Smiles on our faces as we waded through the water. Note Gumotex inflatables reliably wade. The Feathercraft K1 whose tubes are being realigned in Singapore glides.

Confidently we waited at the second carpet of floating hyacinth for a long tail to cut us a path. I powered after and came to an abrupt halt after 50meters extricating myself backwards. No more boats appeared to cut a path for us. ‘Where’s Heang?’ I wondered. ‘Boss shall I try?’ Lors shouted over his back as he heaved their way through. We heard war cry’s as he attacked the floating mat with his immense strength ably aided by Jin. His shouts got fainter and their heads disappeared into a sea of leaves. 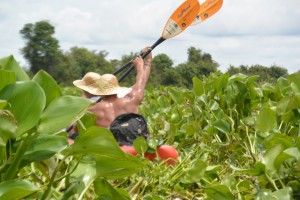 Lors and Jin heading into the hyacinth

The rest of us looked at each other, sort of shrugged our shoulders with resignation and headed after them. I’d followed first but my shoulder muscles don’t compare so after 20 meters came to a grinding halt, wedging the kayak on the floating carpet. Ra and Bunthy squeezed past with Bunthy at the front clearing a way and Ra providing the power behind. 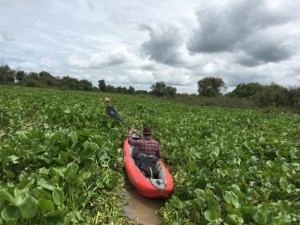 ‘Two questions Buntha, where are we going and how long to get there?’ ‘Prek Toal, by boat it’s close, by kayak through the hyacinth tomorrow.’ Hmm, actually he was wrong on both counts. An hour later we’d cut though to an oasis of clear water in the desert of hyacinth. ‘Nick just wait for Heang,’ said Buntha after he’d called him for the fourth time. Either Buntha or Heang and probably both of them don’t know where we are. The sound of fiberglass long tails could be heard tantalizingly close but not the chug of Heang’s heavy wooden boat. 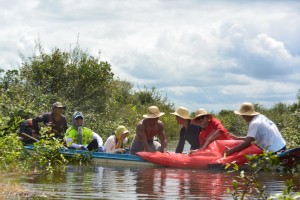 ‘Heang’s not coming and we get the first long tail,’ I concluded. It turned out to only be another 20 meters where Lors and Jin waited on what appeared to be clear water.

The reverberating crash of the 2 stroked long tail engine grew and 2 kids appeared one clad in a fetching turquoise velvetine jacket and clashing orange wedding bonnet. ‘Its blocked,’ (in Khmer). The next driver didn’t have much choice as Lors turned pirate hijacked his boat. We transferred in pairs. Lors and Jin hauled the kayaks on board, deflated and rolled them up in the narrow boats. 7 of us sat on top of our rubber bundles while our driver headed off who knew and after the hyacinth, who cared where.

We’d come a long way, taller trees, clearer water and alleluia no hyacinth! Two Black-headed Ibis amongst Open-bills, a Grey-headed Fish Eagle disguised as a tree trunk, cormorants, darters and White-throated Kingfishers. We could have kayaked, I thought but an hour later we were still nosying our way through the flooded scrub with no sign of the Prek Toal telephone masts in sight. We came to a stop at an illegal fishing net blocking the narrow waterway. Our driver was an illegal fisherman but at that point we weren’t complaining. We gently untied the net and carried on. It had been a while, there were a lot of us in the boat and my thoughts turned to exactly how much fuel remained in the tank. And how long could our driver continue hacking through the undergrowth with a laboring engine before it gave up. The telephone masts appeared over the flooded scrub before my thoughts became reality.

The main channel in Prek Toal floating village presented the next challenge as the wake from other speeding long tails threatened to sink ours laden with us and our kayaks.

Heang was waiting for us at The Cheang platform (Buntha’s family), he and Poo our van driver had cooked lunch. We hadn’t been heading for Prek Toal but Kampong Prahoc 10km up the Sangke River and were nearly there before our illegal fisherman saved us. Chicken, cabbage and beer had never tasted so good. 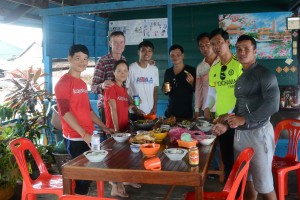 Pride swelled up in me, Khmers have a calm stoic strength though the flip side is that means they allow shit to happen before they do anything about it. Talking of which Heang’s boat broke down on the way back.