The Churning of The Sea of Milk 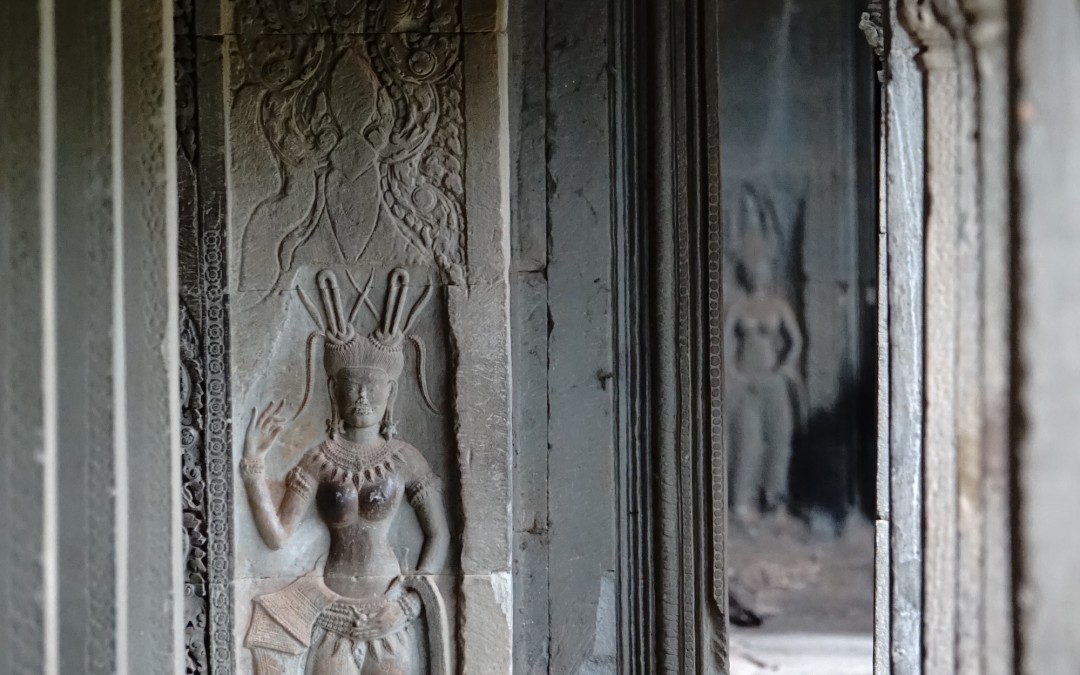 The Churning of The Sea of Milk

The bas-reliefs on the walls of Angkor Wat are perhaps the pinnacle of Khmer Art. The carvings 2 meters high, stretch for a staggering 600 meters around the temple and depict scenes from the great Hindu stories, including the phantasmagorical if fundamental Churning of The Sea of Milk, which goes something like this; 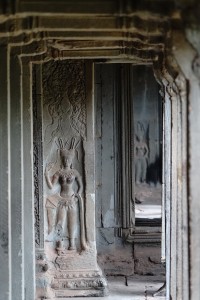 The outer corridor alongside the Churning of the Sea of Milk

The Gods and Demons decided they had had enough fighting and it was looking like they were going to destroy the world so they went to Vishnu for advice.

Vishnu suggested they put all the medicine they could lay their hands on into the Sea of Milk to create the elixir of life that would bestow indestructibility amongst many other amazing things to whoever drank it, then have a big tug of war to see which lucky team got the joy juice. 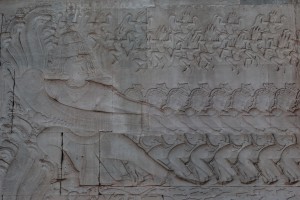 Ravana an Assura (demon) with the head of Vasuki (snake king)

The recipe for Amrita as the elixir of life is known, goes something like this; take one ocean and churn thoroughly with a celestial blender until the ocean thickens, a thousand years is suggested. A good test of when you’re getting close is buxom Apsara or nymphs will start to evaporate from the seminal waters.

But what could they use for a blender. A rope that hundreds maybe thousands of hunky Demons and Gods could tug on and something to tug round was needed. The serpent that lived at the bottom of the ocean of course, actually he was Vasuki king of the snakes and Mount Mandara. 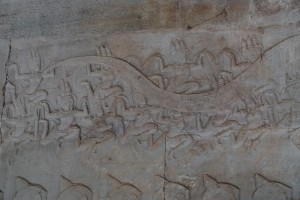 The Demons got the head* and the Gods the tail and they tugged for a thousand celestial years (which is a very long time), round the mountain in the middle of the ocean.

*Read on to find out why Vishnu tricky as ever and it has to be said a little biased in favor of the Gods had advised them to take the tail end and leave the head to the demons.

They tugged so hard that the mountain sank. Vishnu in his second reincarnation (there were ten in total) came to the rescue as a convenient and rather large tortoise lifting up the mountain on his back. 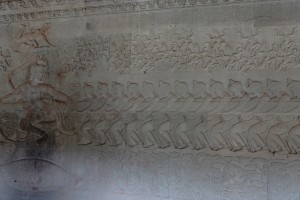 Meanwhile Vasuki, the king of snakes was getting pretty fed up of being tugged by hunky Gods and Demons for a thousand celestial years. Exhausted he sprayed the Demons (since they’d got the head) with halahala that was definitely not going to bring joy to the juice, there was also the small matter of destroying creation.

Shiva to the rescue, he sucked up the halahala thus saving creation and the rather wingy Gods but in the process got a sore throat and turned blue. His wife Parvati was so alarmed that she used Shiva’s chariot to dig a lake, which cooled his throat.

Anyway that’s about the end of the story. It seems in the end everyone was happy and there was enough joy juice to go round. The Gods got lots of divine nymphs while the demons got the grumpy goddess Varuni, who had a bit too much halahala. Vishnu got a new wife Lakshmi and Shiva, now recovered got a moon to wear on his head. 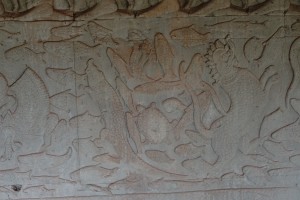 Another ending to these celestial shenanigans was that as the thousand years stated in the recipe were up and the ocean turned into the elixir of life. There was much singing and dancing. Apsaras flew up from the waters and white elephants trumpeting the occasion also had a go at flying.

The Gods, Demons and cosmic blender, Vasuki had done their job turning the ocean into joy juice now born in an urn by a heavenly physician. Quick as flash the demons grabbed the urn from the Doctor’s arms and were about to drink when the most beautiful girl in the world appeared. 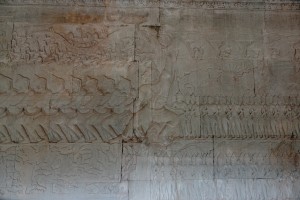 Hanuman, the monkey god making sure the Divas keep tugging

Will you give me anything I want? She pouted her lips and thrust out her bosom, anything, anything, they cried. Will you give me your joy juice? We will we will, they sighed exhausted. Snatching the moment the beautiful girl, actually Vishnu, gathered up the elixir of life and scarpered over to the Gods, who rubbed whatever Gods rub in anticipation of their impending transformation. They were already Gods so I’m not sure what they were getting transformed into but they were very happy.

This ‘story’ doesn’t end there because the Demon Rahu, who knew what a tricky character Vishnu was, that is if you were a demon. Had managed to get a quick slurp of the amrita but not before he’d been spotted by the sun and moon who told Vishnu what he was doing. Vishnu now back in his chiseled form cast his discus to cut off Rahu’s head. Rahu had managed to get in a quick sip but hadn’t swallowed yet so while his head was impervious to the oiled God’s manly manipulation of his orb, Rahu’s body died.

Not one to forget a grudge Rahu or his head had it in for the Sun and Moon and plunged the world into darkness but his bark was worse than his bite so the Sun and Moon laughed at him and moved out of eclipse.