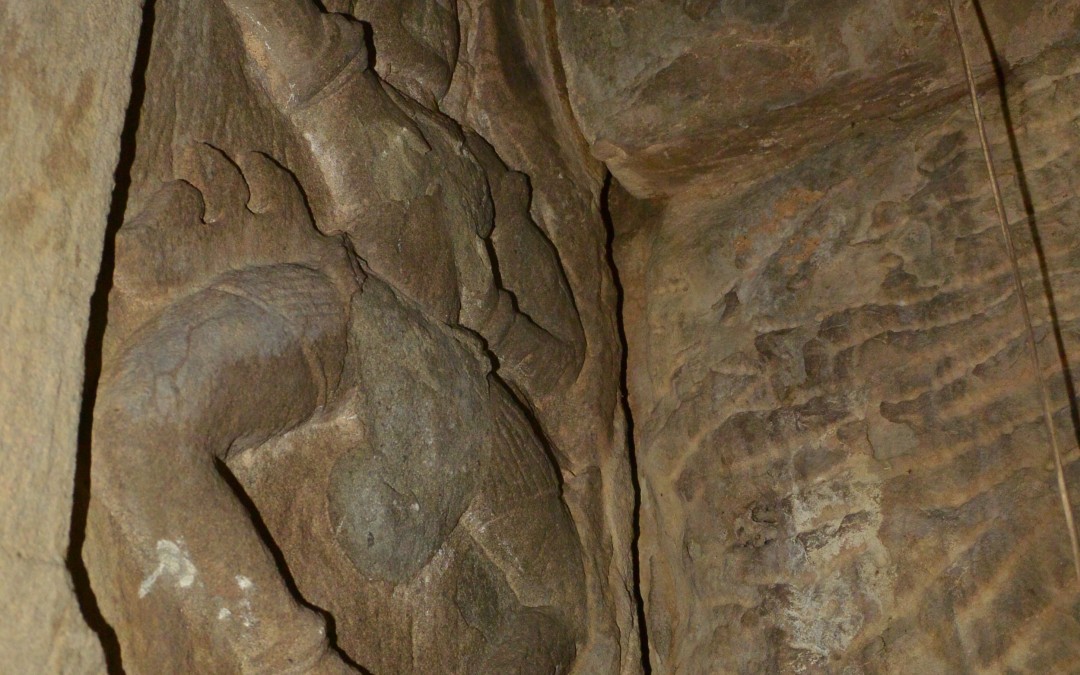 In the glory days of our romance with Amansara* we had helicopters and oxcarts to and from the Tamarind Temple in the city of Angkor as a standard trip. Last year Apsara, the temple authority built a road and put an end to our white tablecloth champagne temple lunches. So we needed a new one – temple that is.

It all started 8 years go when a monk came to see me about a forest and we discovered a temple ………..

Skip 8 years and we were trying to find it again not helped by its many names. Prasat Yoni or Temple of the Vagina being the most mentioned. Our adventure guide was given the mission and came back with a photo and tales of a temple but not the one I remembered. 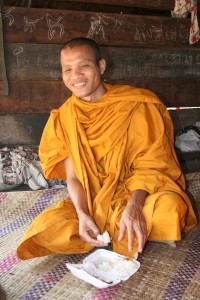 Chum Nean the monk, who in 2010 was trying to protect his village from the encroaching rubber plantation and took me to Pong Keou

Yet another year and now motivated by an enquiry for a temple lunch we set off as a team on mountain bikes through the bush. Armed with local knowledge gleaned from villagers on route, we came upon a patch of forest but still no sight of it. Then hacking through the vegetation with machetes the laterite walls appeared. 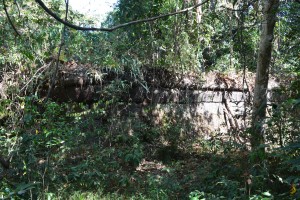 Our first sight of Prasat Pong Keou in August 2018

Skip to October at The Ivy Restaurant in Chelsea and a lady called Di who had a client called Peter and we’ve almost got to the start of the story on Christmas Eve. But not so fast, there was a helicopter to organize. It seemed simple in August when we first found the temple but by October when we went to choose a place to land and record the GPS coordinates, the dusty dry countryside had become a large lake. Forget helicopters kayaks would have been more useful, we went back again at the beginning of December to choose the landing site.

Let me introduce the supporting cast for this performance; Ra our temple host, Buntha AKA Mr Fixit, Miss Wong master chef Dean. Then there was Black-dog the van driver and Bong Kroyun, who steered the tractor or kroyun *and Mr Pal who made mince meat of helipad construction. Oh and myself. My main job was to panic and pester to the point where it was easier to get the logistics sorted than put up with me.

Things go at their own pace, to be messed with at your own peril or most likely slowing down whatever you want speeded up. So while I hadn’t a clue why we were waiting at Buntha’s house in Samrong his village on Christmas Eve, it became clear as events took their own course.

Logging, encroaching agriculture and forest fires had taken their toll since we last visited. The paths looked different and we went down the wrong one. Not an auspicious start to our big adventure.

Who was our guest? I can’t really say, client confidentiality and all that but suffice to tell his online profile was considerable and intellectually engaging. The rest of his family; Sarah his wife and 3 fey daughters, Princesses sheathed in gossamer gowns, crowned by coronets – lady’s of the lake.

Mr Pal, Buntha, Black-dog and myself hacked our way through the undergrowth, finally glimpsing the blocks of laterite that made up the walls of the etheral Prasat Pong Keou, as much a myth as reality. As if that wasn’t hard enough termites had colluded to prevent entry. There was a tantalizing peek at the West entrance but short of wriggling across a bed of ants no way in. Illegal logging and vandalism had bulldozed a hole in the wall to get at a valuable rosewood tree, our necessary entry point. 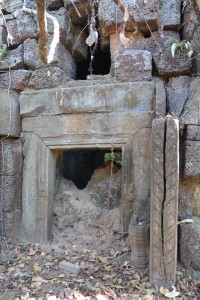 What used to be the entrance to Prasat Pong Keou

The gash in the wall was like a link in time to a thousand years ago when a different world was inhabited by a culture that hadn’t yet outgrown its environment. A microclimate of intense humidity and heavy mystery hung over the ancient remains of what the kroyun driver told us was a halfway house along a long gone Angkorian road between the major temples of Koh Ker and Beng Melea. Our presence was like a warp in time but not space as we carefully cleared away the secondary growth since whoever had been here last.

Tripping over tilting stones we found a central tower block with multiple entry points. One lead to a blind chamber adorned by primitive Apsara*. Four had been defaced but the furthermost corner carving had escaped the vandals. Fern fronds hung from the temple terraces like they were planted at a Chelsea Flower Show feature garden. 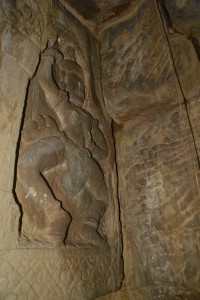 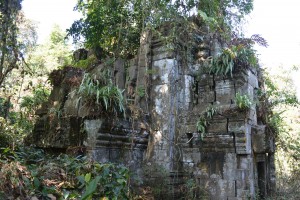 More to the point where were we going to balance the table and chairs for Christmas lunch? We retreated to clear a route through the vegetation and coarse grass back to the rutted laterite road we’d left. We saved the helipad for the next day. We leap frogged each other as our motorbikes took it in turns to get punctures and made it back to Buntha’s house in Samrong.

A house if you’re lucky enough to have one is just a space in Cambodia. We furnish and decorate our rooms according to what we’re going to use them for in a way that pleases us. In Cambodia if you want to wash you find a space where you can scoop water from a pool. If you want to cook you use a clay charcoal pot to boil or fry whatever you’re cooking. And when you want to sleep you roll out a mattress, hang a mosquito net and if you’re lucky position a fan. In spite of or because of this different approach I lay on my comfortable mattress in relative cool, clean and well fed.

Christmas morning and there was a kroyun* where Buntha had organized one to be and another on its way so we set off to scythe rice straw. I seemed to miss the straw and hit worm mounds sending the blade flying from its handle and quickly turning the callus on the palms of my hands into blisters. I realized that my future career didn’t lie with rice farming. 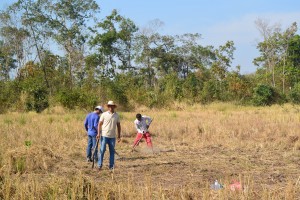 I was much better at making an H. It started as an H but we cleared some more rice stubble so added an I and connected it to the H with a hyphon = I-H. Since our retiring temple seemed to change location each time we visited I went to check that it was still there and see if I was better at hacking vines than rice straw.

Dean had arrived on the second kroyun, so we ported the provisions through the gap in the walls and proffered the stage from which he was going to work miracles, so far so good. We cycled back to the helipad to see if the helicopter carrying our precious guests had arrived.

Meanwhile the rice farmer whose field we’d appropriated had turned up. He’d heard on the jungle grapevine that a barang* was digging up his land. Pacified by Buntha he saw instead that we’d cut his straw for him so he retreated to a safe distance to watch the fun with his wife.

A while later a whir could be heard across the forest and the speck in the sky materialized into our aircraft. It circled the landing site a couple of times, deciphered my I-H and descended amidst a blitz of rice straw.

*barang lit. Frenchman but used as a general term for all white foreigners 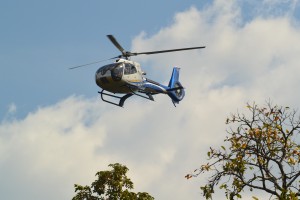 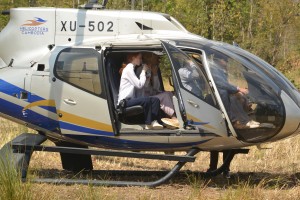 Our guests approach and land

“Mr Fletcher I presume,” I’d been saving it up for a long time. “Good to meet you,” he generously replied. We arranged his family on the kroyun trailer and set off on the trail for lunch.

It had been a good call to mechanically convey these gentle creatures rather than line up mountain bikes and expect them to wade through the sand. A chain of boys was waiting to guide them through the laterite portal to where Dean like a big mother hen dispensed cold towels and bonhomie. “Your temple.” There was a collected wow before they started exploring its nooks and crannies then settled for champagne and turkey. 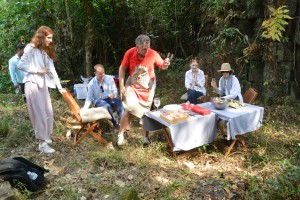 I sat slightly aside on a stone with a glass of Moet and for the first time in 36 hours started to relax. The Moet gone and half a bottle of Dean’s Prosecco later, I was definitely relaxed as I said goodbye to the guests. Replete with the considerable remnants of the guest lunch, the ‘team’ lined up to convey the cool boxes and general paraphernalia back to the kroyuns.

Buntha and I raced ahead on mountain bikes too elated to notice the clogging sand we glided over. We caught a glimpse of the helicopter circling above the trees and that was the last we saw of our guests for Christmas lunch at Prasat Pong Keoy.

As a footnote the kroyun drivers were well rewarded and anybody to hand back at Ta Siem Village got a can of soda. Everyone involved in the undertaking was generously tipped. ‘Could we do it again Buntha?’ ‘Yes,’ he said confidently, ‘we’d just have to pay more.’

I received several messages that night from Mr Foster – not his real name thanking us for an extraordinary event. Di had asked for something that nobody else had done before. It’s very unlikely that in the temple’s thousand year old history anybody has had Christmas lunch there, especially not a family from London.