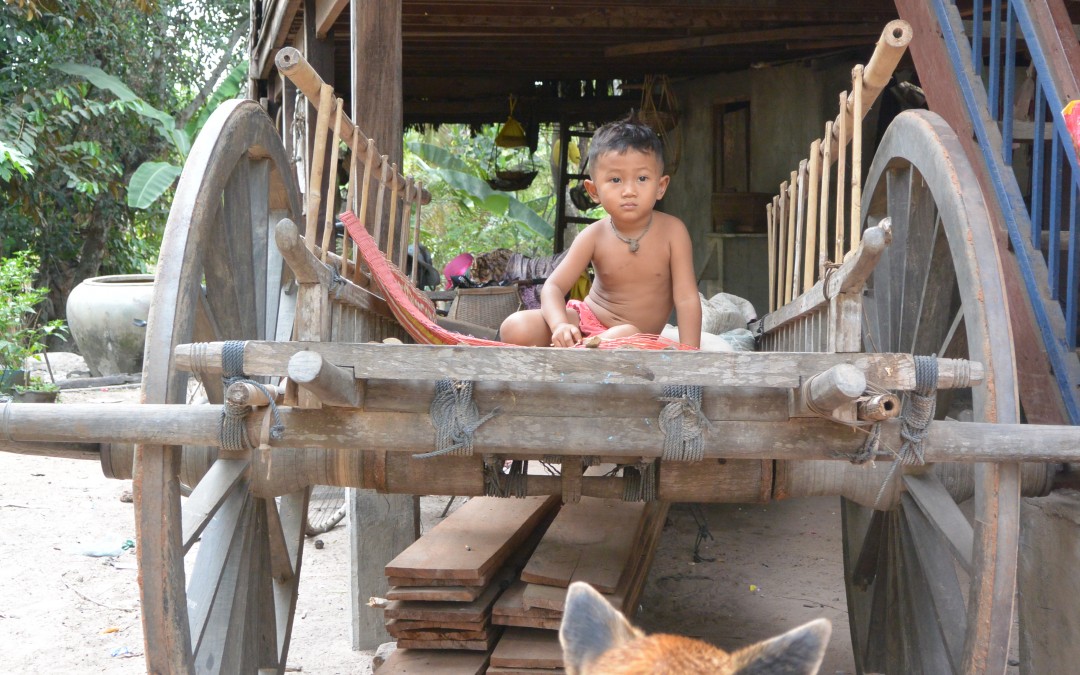 A million miles from the dusty city center and the tour buses jamming the road to Angkor lies the ancient lake of Boeung Ta Neue. Our mission that morning was to discover if this was a kayaking adventure or just a paddle on a large pond. 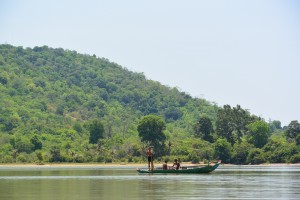 The lake lies at the base of Phnom Bok, a 250 meter hill that looms large over the surrounding countryside and a reference point for our cycle rides, hikes and now we hope kayaking. To give you a flavor of all three I’ve taken a bit of poetic license and combined our adventures together.

Our story starts and finishes in Pradark as so many do, we later found out. Pradark for those who haven’t been there is a crossroads with a market on one side and restaurant (loose description) shacks on the other selling rice noodles with fermented fish Khmer num ban chok. We started our bike ride on the old road that leads to Pradark Pagoda, a wat shaded by tall trees protected by the monastery. 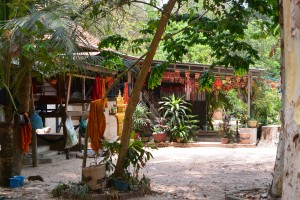 A monk’s house at Pradark Pagoda

Cycle left from the well by the lady washing her breasts, continue through scratchy bushes and there in front of you is the excavation site of Prasat Kom Nat. Eleven hundred years ago this was a hermitage for monks and place to store the Sanskrit encrypted stellae that recorded the history of the Angkorian Empire including how the king happened to be feeling that day. 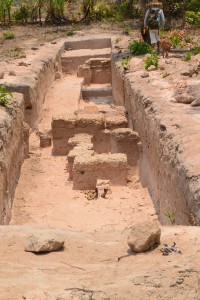 Crunching rice stubble we paddy bashed back to the shady path that runs along the banks of the East Baray. The ancient reservoir is a perfect rectangle 12km long by 2km wide once brimming with water. Now it’s a fertile patch of irrigated land, where multiple crops of rice shine bright green the year round. 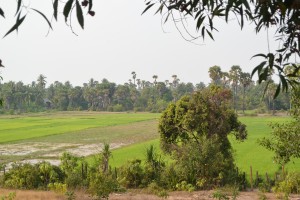 View of the Baray from the East bank

The Village of Pum Samre is built on either side of the path where we cycled, that is until we reached a wedding. A tent had been erected over the dirt track and a bank of speakers piled ominously in front of the family’s house. We rode between the tables of spangled women in tight nylon dresses and drably clothed men in ill fitting long sleeve shirts and trousers, who oblivious to our bikes continued to toast with Angkor beer and ice. And wash down whatever offal was on the wedding menu that day.

Village life was on show; buffalo snorted, cows chewed, dogs barked, children shouted hello then goodbye, adults the customary greeting ‘mow pi na?’ Where do you come from, moto-dops and bicycles, beautifully crafted oxcarts and the mechanical kroyun or tactors that are replacing them. 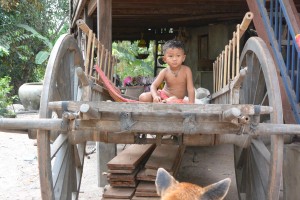 The village of Pum Samre

Wooden houses built on stilts to provide shelter from the rain, sun and insects. Mango trees to give ripe mangoes, coconut palms – well its obvious and sugar palms, you’ve guessed it sugar and the wine that ferments in plastic bottles hung beneath the flowers, reached by a bamboo ladder tied to the side of the tree.

Ahead of us lay the lake that laps up to the base of Phnom Bok, or at least it will when the rains come, but first Prasat Tor. We nosed through the thickening vegetation that cloaks the temple. Three laterite towers on a raised mound, where shaded by a leafy tree our table will be laid for our guest’s lunch (will because we haven’t done it yet). 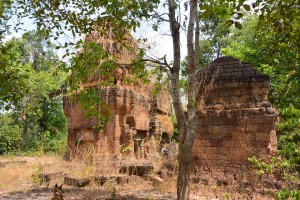 A barang (foreigner) on a dirt bike with a big bag is reason enough to abandon whatever you are doing. When the big bag turns out to be a boat – our kayak, it becomes a day to remember. So by the time we were ready to start we had a launch committee. The fishermen in underpants stopped casting their nets in wonderment while those submerged to their noses turned to stare. 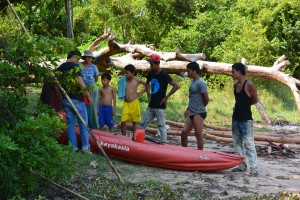 Clad in a mantle of green forest the mountain dominates the lake. At its base cows grazed and fishermen returned with their catch, from which the women make prahoc (fermented fish). Ladies cut spiky leaves to weave baskets and buffalo munched on water hyacinth. 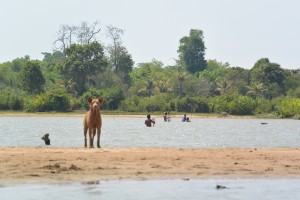 Cast net fishermen (and a dog)

We set off to find the West channel , a bamboo fishing fence. The North channel, clogged by mats of impenetrable water hyacinth and the South Channel, no water. So we paddled back to where we’d started. In a few months the lake will have swelled opening up the rivers and canals for us to explore and paddle to our pick up point.

Lunch was back at Pradark where we’d started with Num Bang Chok and Angkor beer. Mixing the required vegetation into the coconut noodles, first a white taxi and a fat driver who’d just ordered his noodles and coconut when a second blue taxi screeched to a halt beside our table. The driver of the second taxi jumped out handed some dollars to the fat driver, while a lady sitting in the back seat pulled a barely conscious girl out of the car and carried her across to the white taxi, which sped off before she could close the door. 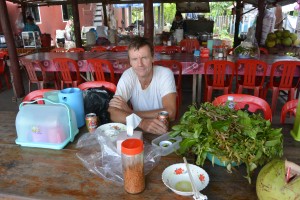