The Story of Jayavarman VII as told by his temples 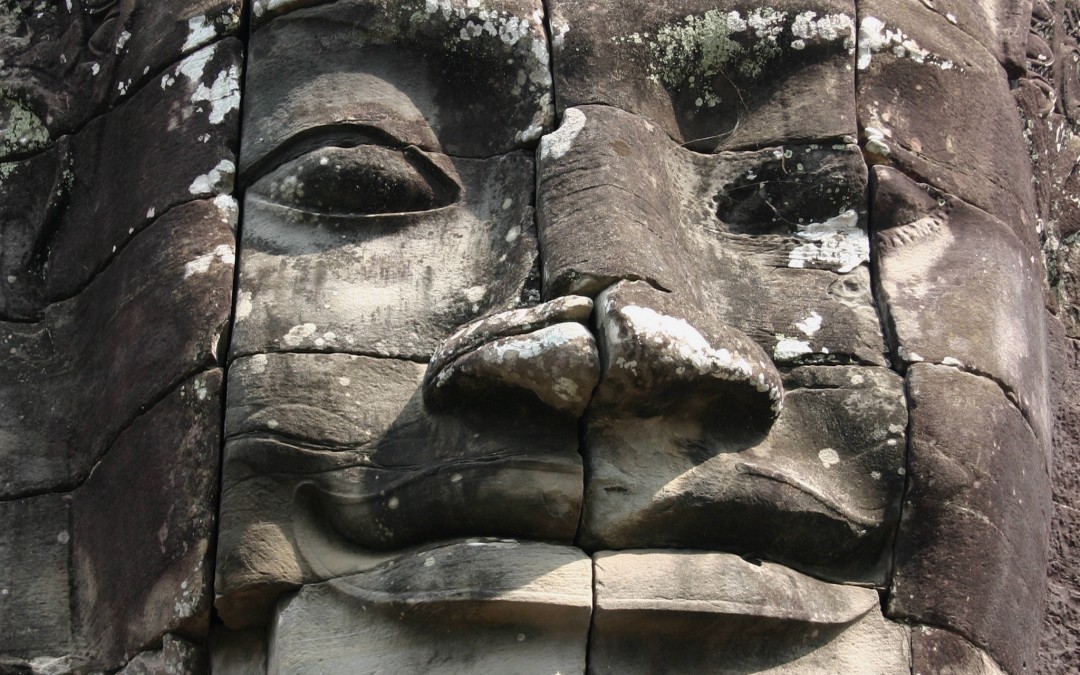 JVII (Aka Jayavarman VII) with apologies to The Angkorian Empire

It gets confusing, 26 kings all ending in – varman, building thousands of temples and ruling for 500 years. So today’s story is going to concentrate on just one JVII with references to his uncle SII, who was by all accounts also a very great king. And to set the scene we need to mention JII, who started it all on a mountain (so he could throw stones on the Cham who continued to be revolting throughout the Angkorian era). 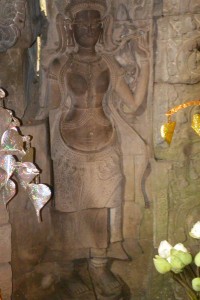 JVII was born early 12th century into an empire at the peak of its powers. The nephew of SII, who ruled over the Angkorian Empire when it covered most of South East Asia including Champa – home of the revolting Chams – ‘boo’ (now Central Vietnam). As a teenager JVII was sent to Champa to learn it’s ways including military techniques, which as you’ll see comes in useful later in the story. It’s said that a Khmer allied Cham royal family adopted him. His first wife who we’ll call Thevi I, and figures early in the story traveled with him to Champa.

Meanwhile back in Angkor SII, while at the height of his reign was murdered by one of his commanders, who declared himself King. Word reached JVII in Cham that his uncle had been assassinated so he set off with Thevi I to exact revenge on the Usurper but he was too late.

The revolting Cham sensing a weakening of The Empire launched a fleet of boats, sailed up the Mekong and into The Tonle Sap Great Lake to invade, sack and kill the Usurper. JVII realized he wasn’t ready to attack the Cham so he headed into the forest to assemble an army.

Oh and in the mean time got the temple bug and built his first, Preah Khan in Kampong Svay, not to be confused with its namesake in Angkor (more on that later). 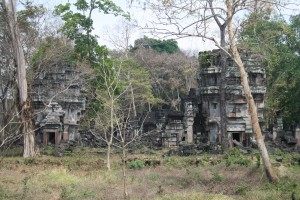 Time was ticking and JVII getting on so at the age of 53, which was as long as a lot of Khmers lived for at the time. He marched at the head of his army to defeat the Chams. This was where those early years in Champa came in successful and after a campaign of 4 years they were defeated and he proclaimed himself King of The Angkorian Empire. Guess what he did first? Build a temple of course. Preah Khan, which while not a particularly original name was generally regarded as a very good temple. So good in fact that he dedicated it to his Dad and moved in. JVII was also regarded as a very good king, the best in fact and one reason was his secular approach to religion. A Buddhist but not an exclusive one he included Hindu’s in government and encouraged them to use his temples (probably so he could spy on them).

The 4 year campaign had taken its toll on Thevi I worrying about her love fighting those revolting Cham, she died of a broken heart. Bereft of the younger sister JVII married the elder, who we’ll call Thevi II and with her support embarked on his first phase of construction. Mindful of Chams and Khmers who wanted their old Hindu religion back he needed an Angkorian broad band. In those days roads were the only way to control a rather large empire so he built a lot of them with rest houses every 15km. 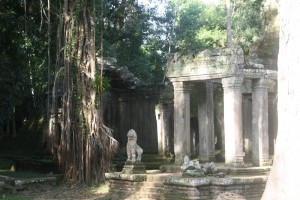 Back or South Gate of Preah Khan – Angkor

His brand of Buddhism was unusually kind for the time and espoused being nice to each other so he built 102 hospitals. Reservoirs, he loved building reservoirs and dams and channels to connect them. That’s a story in itself but as part of all this Mahayana Buddhist niceness, it meant that his people could grow a lot of rice with irrigated water from his channels. In this part of the world, where there’s rice there’s fish so he ensured Angkor’s food security. In turn the population, honed, toned and hunky with JVII’s obsessive temple building, were ready to take on revolting Chams.

Thevi II, you remember her? Actually it wasn’t so long ago that they had married – was a big cheese in The Empire, Director of The Buddhist University and responsible for the morality of the kingdom. 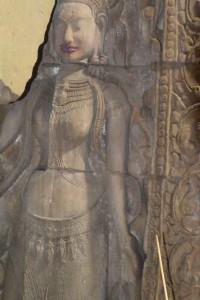 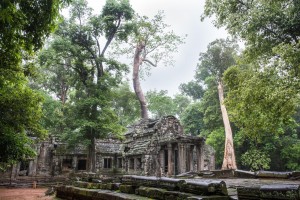 Flush with success from all this building for the people he got back to temples for himself and started his second phase of construction, commissioning Ta Prohm for his Mum. JVII must have dreamt of temples because he was churning them out. Culminating in the third phase of construction and his masterpiece the Bayon. It was modestly dedicated to him. Depicting Mt Mehru at the center of the Universe AKA Angkor Thom, the state temple while he was alive and his tomb when he died.

In the 13th century this was a city of 70,000 people living in a Florida style grid of villas each with their own pool and 2 Oxcart parking lots. Location, location, location JVII had the best, his wooden palace with of course a pool and for him elephant parking, looked out over The Bayon. The omnipresent loksvara, mugshots of himself carved into the stone pillars reminded those upity Hindu’s who was boss. 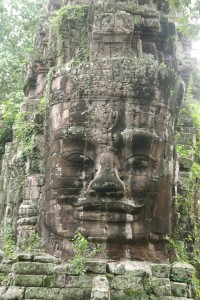 Old JVII, he was old by now probably around 70 when construction on Angkor Thom was started, had had a monumental life, certainly he left a lot of them. And must have wanted to record his achievements especially when if came to fond memories of bashing the Chams.

Unlike most Khmers today he didn’t have a smart phone so the next best thing was to commission an army of sculptures to carve out a comic relief on the walls of his state temple. Like the Terracotta Army in 2D great battle scenes are enacted, daily life depicted and the wonderful diversity of the Cambodian countryside recorded. 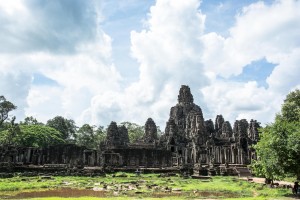 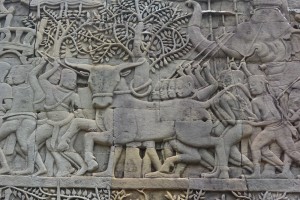 A great king not Mohammed, Jesus or Buddha himself but hey when you’ve reached your nineties and all your mates died 30 years ago perhaps not surprising JVII might have been thinking along those lines. These delusions of grandeur expressed in the construction of Angkor Thom a 9km square city, were beginning to sow the seeds for the subsequent decline of Angkor. The reservoirs and canals that had allowed hundreds of thousands of people to live in an infertile sand pit were not maintained and not prepared for the great drought and floods that followed his death. The system of water management was washed away and the city was no longer able to feed itself, but we’re getting ahead of our story. In the meantime his death; rumors abound, was it Hindu extremists, a jealous son, an estranged wife? At 95 years old it was probably old age.

The dates vary according to which account you read but all are remarkable for the time. 1125 seems to be a probable birth date and 1220 his death. He was crowned in 1181 at 56 and ruled for 39 years during which time Angkor became the greatest empire in the world, truly a great king.

Post script; JVII was succeeded by one of his surviving sons, we’ll call I (as in aye) 2, a leper who atoned for his sins by embellishing his Dad’s temples. JVIII is remembered as a religious vandal who spent most of his time knocking the heads off the Buddha’s that graced JVII’s temples.