Cambodia’s environment is under threat but there are pocketsof paradise which your visit can help support. 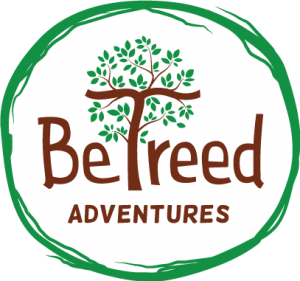 Phnom Tnaut is part of the once vast forests that covered much of Northern Cambodia, which has suffered heavy logging in the last 10 years.

The aim of BeTreed is to protect the biodiversity of 6400 hectares of mixed evergreen and dry dipterocarp deciduous woodland. Guest visits generate direct employment in service provision and help pay for the patrolling necessary to prevent illegal hunting and logging. Ben and Sharyn also run classes for the village children to learn about the forest and the benefits it can bring.

The 200-meter hill and the surrounding landscape is home to a wonderful assemblage of birds and animals including a herd of around 60 Banteng or wild cows. Pileated Gibbons can be heard calling and Silver Langurs spotted in the forest. Over 200 species of birds have been identified including the Green Peafowl and a colorful array of woodpeckers. 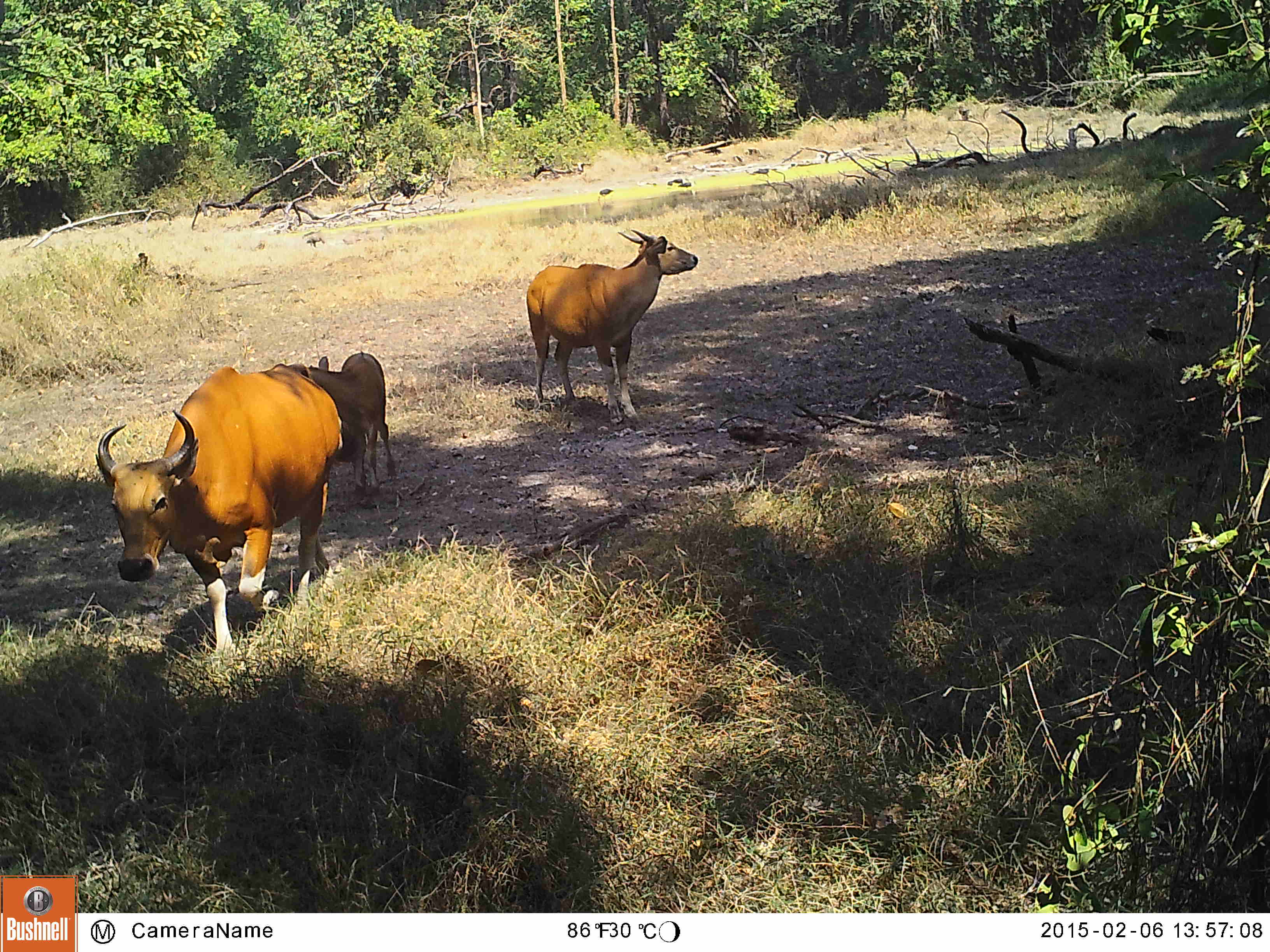 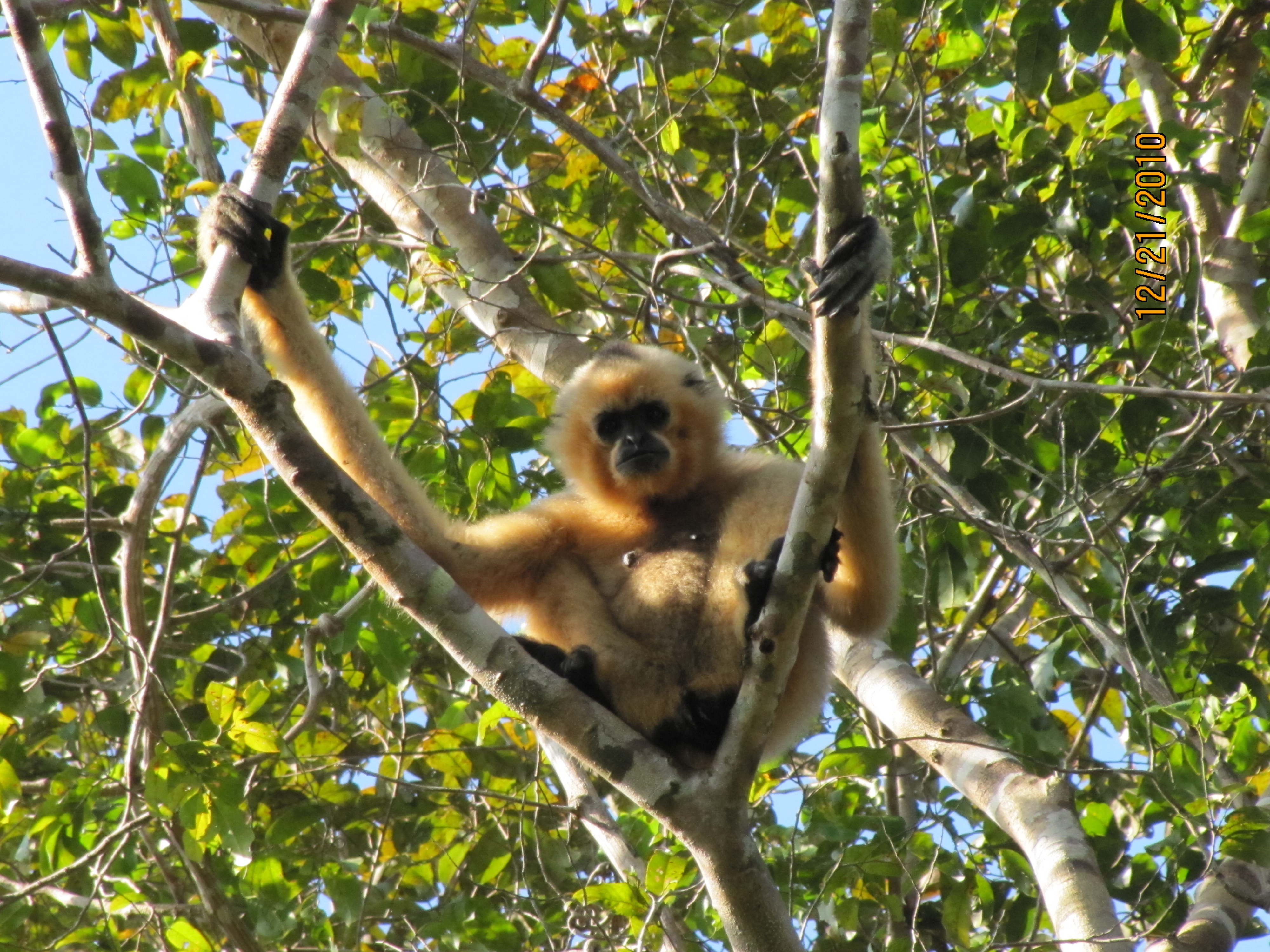 Virachey National Park in The North East of Cambodia is home to the rare Northern Buff Cheeked Gibbon (above). The park was once a vast area of thick forest, now patches remain including Veun Sai Siem Pang (VSSP). Conservation International (CI) work with the Ministry of Environment to protect the Gibbon’s habitat; 21000 hectares of mixed forest supporting a diverse range of animals and birds.

The indigenous Kravet people have long been part of and have shaped the landscape so no long term plan to conserve the biodiversity of the forests and protect the Gibbons has any chance of success without considering the villagers.

A key part of this project is to educate local people about the benefits that the forest can bring backed up by employment in the community based eco-tourist (CBET) project.

Each visitor to the CI station who tracks the Gibbons will be contributing $55 to the upkeep of the park, the community and a $25 contribution to cover the costs of patrolling the forests to stop illegal logging and poaching. 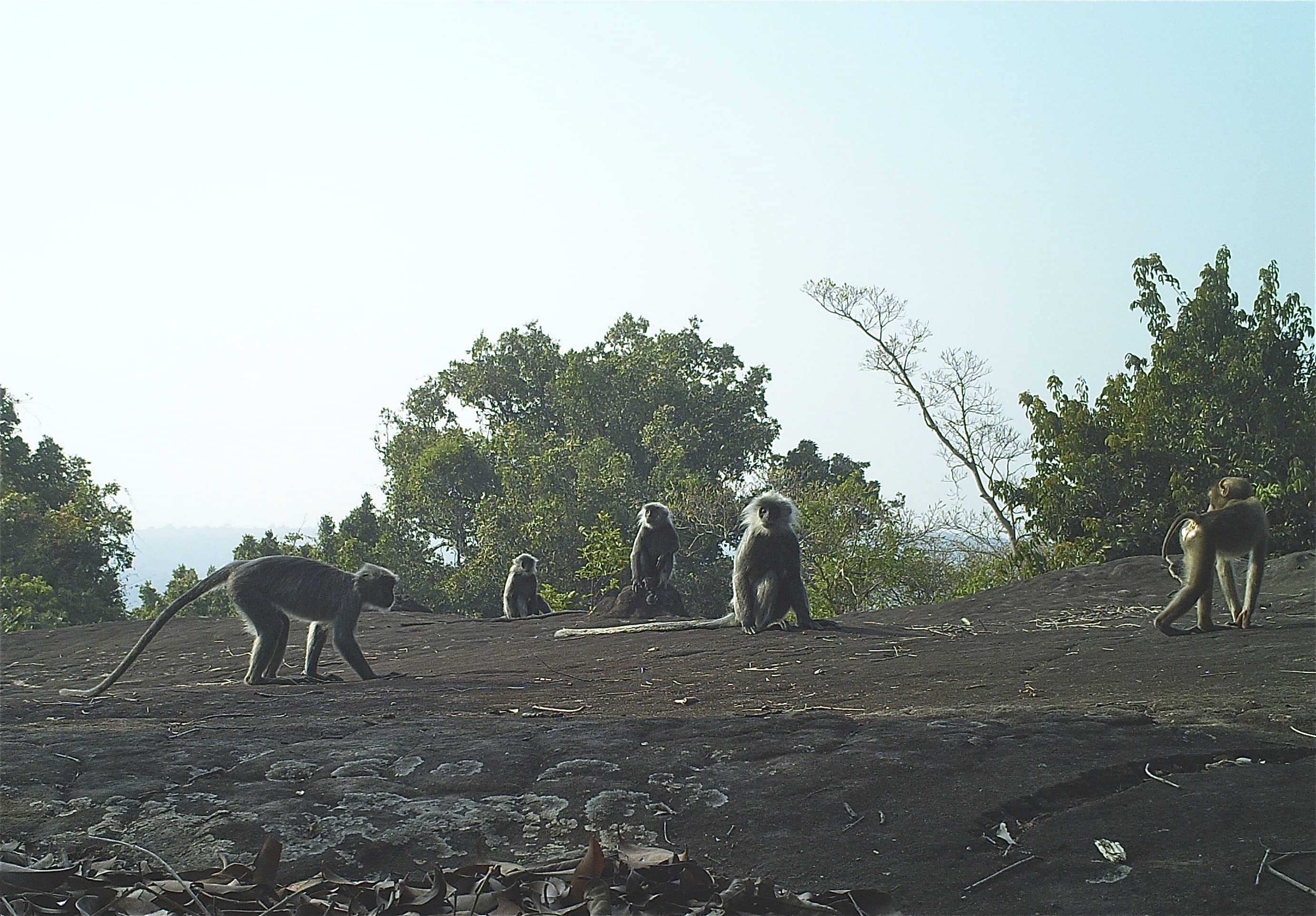 A chain of hills running West to East rising to 500 meters 50 km North of Siem Reap. Phnom Kulen has a diverse and complex mosaic of habitats. Traditionally the majority of the landscape was forested with evergreen and semi evergreen forest, combined with small patches of deciduous dipterocarp forest.

Nearly 200 species of birds have been identified and 40 species of mammals, many of them bats. In 2013 the rare Silver Langur was rediscovered and can be seen as in the photo above with the Pig-tailed Macaque. Slow Loris and the strange Binturong, a type of civet are also present.

The traditional slash and burn agriculture or chamkar was only sustainable with a low resident population and complete forest cover, now much has been cleared for cashew nut plantations.

The remaining patches of forest need to provide a livelihood for the local population to ensure their conservation. Responsible wildlife viewing tourism is one solution providing alternative employment directly dependent on the integrity of environment. Guests visiting Kulen with Indochine Exploration make a direct contribution to the community for projects that benefit the whole village. Village members also guide our groups and explain how the forest plants are used in local medicine.