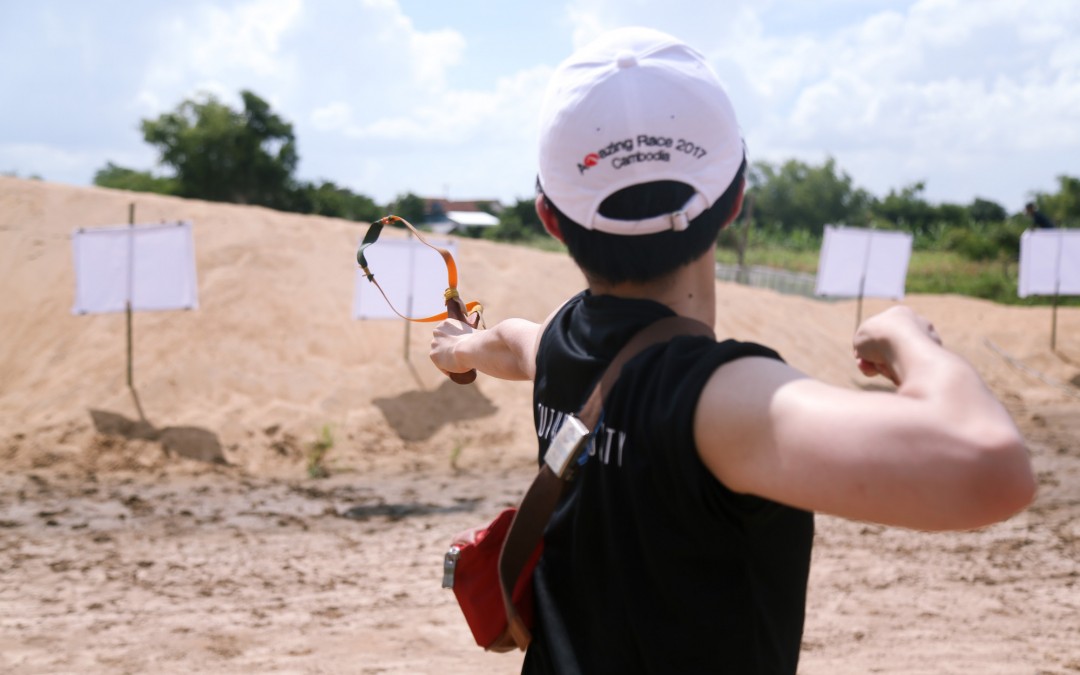 The Mekong, its islands, public ferries and the East Bank, the antidote to a frenetic Phnom Penh on the other side of the river. 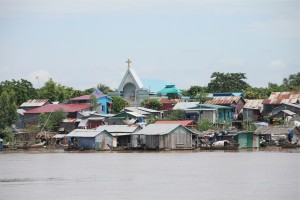 Areykhsat on the East Bank of The Mekong 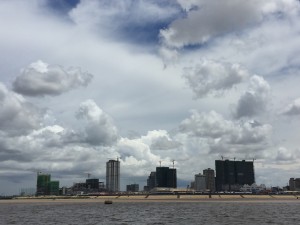 Phnom Penh on the West bank of The Mekong

Khmer games;  Climbing sugar palm trees to pluck sugar palm fruit, or strategically placed little bottles of sugar palm wine in grass baskets. Shooting slingshots, a blindfold bash of clay pots with more containers this time filled with Mekong Whisky. A tug of War in a cow field, volleyball heats at a pagoda, a muddy mountain bike ride and a Buddhist water blessing (they had to find the monks first).

Initially sixty, worn down by the ravages of the conference dinner leaving 35 survivors grouped in teams of 5 tech execs working for a multi national data protection company.

Buntha and I got off the ferry at Areykhsat and looked at each other, ‘what are we going to do next?’ Find a pagoda. ‘Can you bless some Americans?’ We asked a monk, then cycled along the road in search of a silk farm, a main road with the usual crazy Khmer traffic? ‘This wont do, ‘Buntha come back tomorrow and find an off-road route.’ 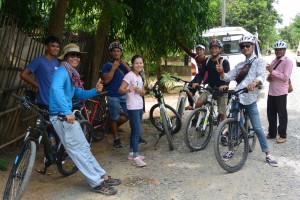 Setting up the games with our Team the day before

First problem; there were too many bikes (60) and not enough space at the Prek Leap Ferry. Buntha called, ‘flying bikes have set them up at the pagoda,’ which pagoda I wondered? Which lead onto the third problem.

Second problem; bladders, probably abused over the conference week, they weren’t holding what they should in the midday Cambodian heat. Everyone wanted a piss. The men were easy, ‘go in the bushes,’ I waved in a wide sweep towards the pagoda’s bush-bereft horizon. The lady was more difficult but she disappeared with Ra and came back happy.

Third problem; ‘Follow me,’ I confidently cried, over my shoulder and headed off down a bumpy road in the wrong direction. The phone rang, it was Buntha, ‘Nick you’ve gone the wrong way.’ ‘False start guys,’ I shouted and turned round which left the Vice President and boss at the back and the slowest at the front. A little ruse I mused.

Like an unleashed tribe of braves on the warpath, they bore down on me and the ferry. The first casualty skidded up the ramp onto the deck having parted company with his bicycle but no obvious damage done. 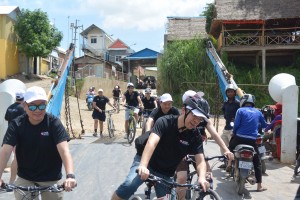 Mobileiron Braves on the warpath

The boat had left the dock as a well-proportioned member cycled to the waterfront. ‘Too late’ I shouted fearing that the employee might try a death- defying leap across the Mekong. I was drowned out, his colleagues roared and the ferry returned.

Lors had done us proud placing the Mobileiron direction indicators at each turning except they were upsi down and read Wobileiron. Also in his zeal to help the teams he’d written the distance to the next challenge in kilograms, confusing his metrics and indicating that the Wobileirons would be 2kg lighter by the time they reached the Tug of War.

Buntha had gone to incredible lengths to construct ladders akin to the bamboo poles that run up the side of the sugar palm trees.

They were metal tubes with welded lengths of steel for rungs, enough for a gravitationally challenged tech executive we thought except they started pinging like bursting pods and left our Wobileirons clinging on for dear life. 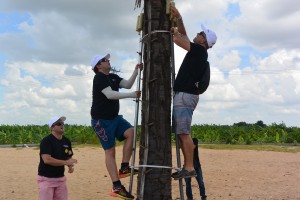 The incentive of winning and alcohol meant this didn’t deter them for long and soon they were off to shoot things. They loved it so the slingshots were a success with the Anglo Saxons. The Japanese kept hitting their hands and sending the pellets backwards. 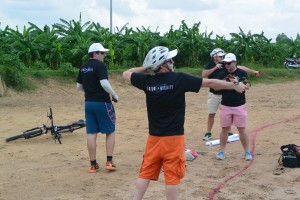 On second thoughts perhaps a missed opportunity as we could have combined the palm tree challenge, slingshot trials and water blessing by shooting monks out of palm trees.

The ferry man had us by the balls and the more the Anglo Saxons screamed to leave and keep their lead the more he grinned and asked for another dollar.

I pointed out that they would need a competing team for the tug of war and volleyball so we waited for the Grey Team.

Across the river we’d tied clay pots to a Boddhi tree ready for the breaking pot bash.

The idea was for us to leap frog in front of the Wobileirons but the Anglo Saxons and the head office team were going too fast.

Sreymom was left trying to tie blindfolds on burly Singaporeans two times her height, spin them round then run for dear life as they started blindly bashing their bamboo staffs to hit the pots and reap the rasping reward of the Mekong Whisky inside. 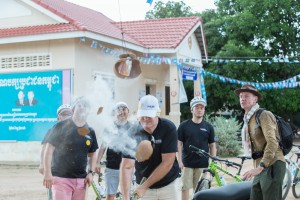 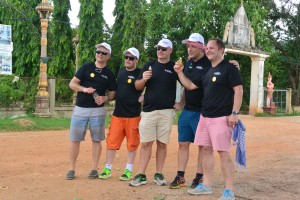 The Anglo Saxons reaching the foregone conclusion that they’d won

We sent Lors, our adventure guide racing ahead to the Tug of War field. He found his métier as the macho muscle man and appealed to the Anglo Saxons. 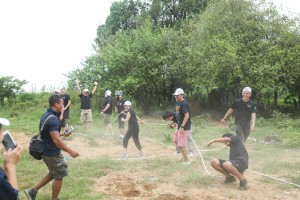 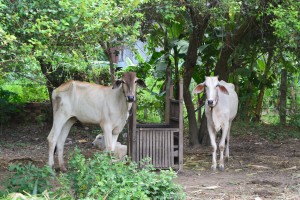 Spectators @ The Tug of War (below)

Wat Svey Chrum was just across the road. There was a Wobileiron sign but the VP and his financial director headed off towards Vietnam unnoticed until another of the Anglo Saxons suggested it might be PC to find him. We duly found them a few kilometers down the road and directed them back to the pagoda. 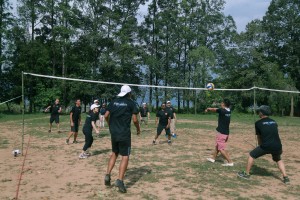 Buntha’s rules as interpreted by Jin appeared arbitrary but with only 3 pax on each team our brave contestants did their best. The VP fell in a leaping lung while another team member nearly killed a bystander so Jin speeded up the scoring to get one of the teams past 5 points.

Buntha and I had carefully researched a particular route but the teams seemed to find quite a few, which they chose at random throughout the afternoon. I took advantage of my proximity to the Anglo Saxons to lead them along the prescribed path to Wat Areykhsat where they had to find a monk and receive their blessings. 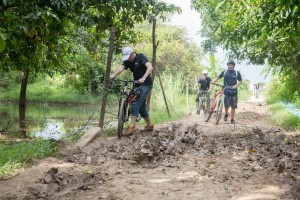 The monks mindful of the promised payments per contestant found our teams then made them follow the ceremony with the appropriate and traditional respect. The contestants duly knelt and touched the ground with their heads then hands together bowed three times to the monks who represented Buddha. 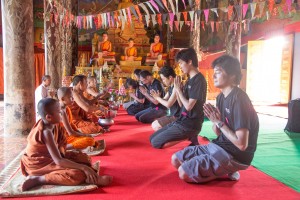 The Anglo Saxons were still up for it though their team was dispersed across Kandal and possibly Takeo Province by this stage. They were on the first ferry across The Mekong then raced beside the river through Phnom Penh to the FCC unsurprisingly winning the race.

I leant on the railings above the ferry station with a blissful beer. Lors had just lead what we hoped were the last teams to the FCC. Buntha hung on the other side of The Mekong to look for lost Wobileirons in case they hadn’t made it. 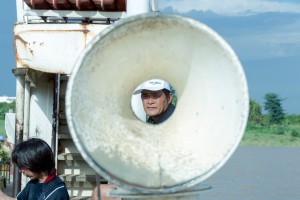 We were lucky that the weather was kind and it helped that we chasing after 35 not 60.

Bunthy had chosen a restaurant half way between Phnom Penh and Battambang for dinner, which stopped being amusing after 50 minutes in the tuktuk trying to find it.

Once a beer had been placed in my hand and the manager dispatched to find wine I realized with a rising tide of pride what a fantastic team we are.

Oh and Jin sang a song and established that Lors would not interfere with him.