The Road to Nowhere

The Race to the Middle of Nowhere – The Scramble for Kulen

About a thousand years too late but then it wasn’t for the first time, the Angkorians had been here before. And anyway the British, French, Germans and Italians took it in turns to claim large chunks of Africa. I reckoned all we needed to do was plant an Indochine Exploration flag on the top of Phnom Srok, Mr Leang said was the tallest hill on Kulen, to guarantee safe rights of passage across Kulen for our Grasshopper guests the following week.

Lors filled Kuong’s van with enough equipment to rival our pioneering colonial peers, a week perhaps? No just one night but that wasn’t the half of what he’d take for the customers. We were going to swing ourselves to sleep in hammocks under the stars but I wasn’t leaving it to chance and had my camping kit (Vallium, whisky and ear plugs) within easy reach.

The escarpment up Kulen marks a departure from the dusty plains and chaos of Siem Reap. The forest canopy contains a calm that penetrates even Kuong’s van. The MoE Station at Preah Ang Thom by association the furthest reach of our adventurous ancestors into the unknown. Pushing it but that’s where we start our trips from so we emptied the van onto Mr Chou’s Oxcart, while Phum rode round the station getting used to the mountain bike we’d brought him. 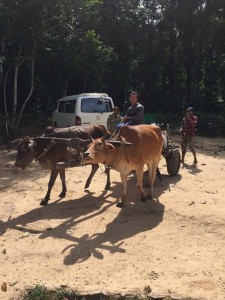 Setting off by oxcart

Lors fresh from his muscle contest in Phnom Penh rippling in lycra, conducted our expedition as we embarked on our mission to cross the empty quarter by way of Porpel Village to Kbal Spean. North of Porpel the path serves the chamkar hacked and burnt out of the original forest.

The forest over years painstakingly accumulates a fertility that the cashew nut plantations gorge on then slowly wither to a scraggy halt.

We halted where the path went back under the trees and waited for Chou and his cows. Lors had bought a chicken for them. I’d got a squashed breakfast bagel from Little Red Fox and then on in the adventure started. The chamkar and reason for using the path stopped including logging? Phum said so, incredible! He seemed to be right. It appeared that nobody had been this way for years. There was a path but it was well disguised such that when it changed direction I didn’t and came to an impromptu halt in the bushes.

Chest high grass gave way to forest as we reached the valley and the canopy closed in. Two years ago the saddest logging was taking out the remaining big trees. Now the vegetation was striking back, linking limbs to lock in the road and block the oxcarts that bore the bloodied corpses of the felled trees.

We emerged out of the jungle into a flower studded grassy veld bisected by the Kulen River. Our campsite was given away by rusty pilchard tins now hidden in the tall grass, evidence of Alistair’s search for Silver Langurs.

Relaxing on the trail and arriving at the campsite

It seemed impossible that Phum and Chou would get the oxcart down the escarpment with no apparent path and then through the jungle so we headed back, fully expecting to abort our mission and spend the night in Anlong Thom. We found them not far along the trail hacking at a fallen tree while the cows contentedly munched the leaves blocking their path.

Our mission to cross Kulen was back within our grasp. Chou had a kettle on the boil while Lors and Phum set up the campsite and I drank tea.

‘Nick get out of the way,’ warned Lors. Phum was flapping his hammock and stamping on the ground to get rid of black ants. ‘I cant get out of the way! Aaargh’ the little bastards stung, but they weren’t immune to deet. 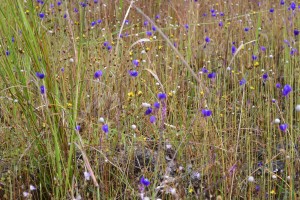 Lors and other flowers of the veld

Only a trickle of water made it down the stream despite the recent rain but the bathing pool remained. I reduced its surface tension by soaping up in the slightly cool water then went back to the campsite to drink beer and watch Lors shirtless cook dinner.

One week on from coming second in The Angkor Body-building Championships, he looked like he could glide like a flying squirrel on his enormous deltoid muscles. Wielding a large bladed kitchen knife he alternated between slicing onions and swatting mosquitoes on Phum for some reason remaining immune to their bites.

We were missing Dean but in his stead he’d sent a family sized pack of chicken casserole supposedly just for Lors and I, actually enough for all of us and their breakfast the next morning. Beer then whisky as Lors and I contentedly chatted about nothing in particular. Mr Chou was wrapped in his hammock betrayed only by his gleaming white smile, 22 and with a baby on the way.

A full moon appeared through the canopy and reflected on the bark of the trees that seemed to grow taller in the dark. 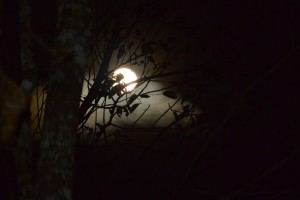 I lay in my hammock looking up through the branches at the stars. A simple camp in the forest worth a million times more than whatever the 5* Sachaya on Bintan Island had cost the week before.

The lingering chill from the night lifted as the sun lit up the leaves around us. Mr Chou and the ox-cart returned to rendezvous with Kuong, while we struck through the wilderness to find a route via the North Escarpment to Kbal Spean, not quite ready for how wild it turned out to be. 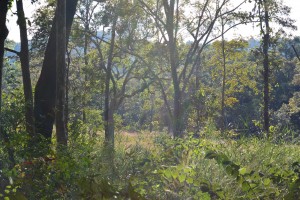 Our campsite at breakfast

Elephant vomit or pig-shit grass life a soft fur covered our way but unlike soft fur it sticks its scratchy seeds to your socks and in your shoes. Enchanted glades of open dipteropcarp deciduous trees gave way to dark caverns shaded by green and lit with white flowers on the forest floor.

The rocks and ruts were throwing me at every opportunity sapping confidence such that I pushed the bike as much as rode it. 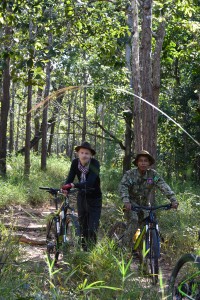 Phum on the trail

We met Leang the policeman with Chomran from Porpel village and 2 rangers with guns though it seemed unlikely that they worked. A few months ago they’d arrested 2 loggers who were in jail presumably trying to find enough money to get out and fined 5 others $1250 each. They were confiscating every chainsaw they found and fining the owners, which explained why the road was disappearing as it had been the loggers that were using it. 3 months ago they’d seen the scratch marks of a bear at Kbal Spean though they reckoned they were still there in the Porpel Community Forest. An old bear had been hunted and killed for its bile. The hunter got $1000 and the middleman $6000 all for some fat, ugly bong thom and his libido. 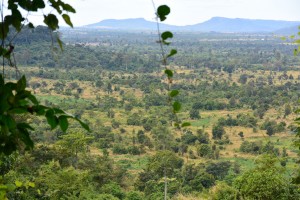 It had been logging central 2 years ago, oxen and carts congregated above the escarpment with crude cut planks from freshly felled timber below, hidden so they couldn’t be spotted from the Wildlife Alliance helicopter that was surveying the mountain. Piled and ready to be collected and taken out via the Forestry Administration HQ who extracted its toll and waited for the next batch to tax. Today there were no signs of logging.

Dr Livingstone I presume? Said Stanley, rather more usefully ‘would you like a beer?’ greeted us as we arrived at Kbal Spean. It had only taken 5 hours but as Dave Taylor had said while lying flat on the grass, ‘this is challenging,’ and technically not a mountain bike ride.