The Stone Cities of Cambodia 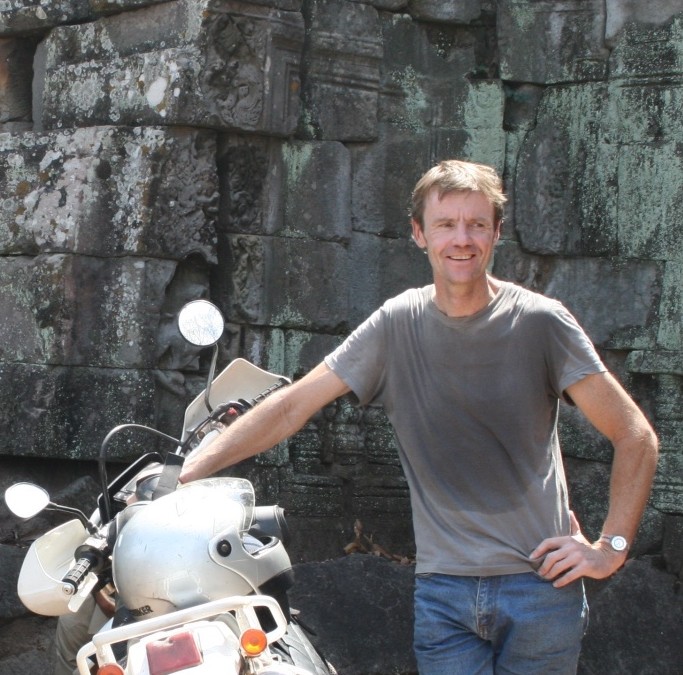 THE STONE CITIES OF CAMBODIA 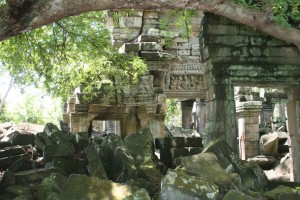 We cheated. We had a helicopter. It would have taken the late nineteenth century French explorers years to hack through the jungles of Cambodia to alight on the lost Atlantis (plural) that we’d planned for our guests that Christmas Day.

We were at the airport for seven to make the best use of the next ten hours of daylight. Strapped in, our mikes and headsets tuned then that exhilarating sensation as the aircraft seemingly does the impossible and lifts straight up, and if the pilot is feeling playful, does a nose down turn that speeds a few meters above the ground before wheeling up and heading West to our first destination. 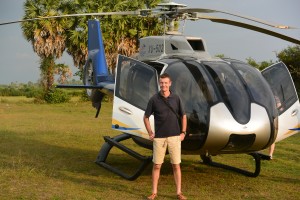 Taking off from Siem Reap Airport

A thousand years ago Jayavarman VII, lets call him JVII ruled his rather large empire via highways that radiated out like the spokes of a wheel that extended to the far flung dominions of the realm, including Route 66 to Thailand by way of Banteay Chma.

Today’s science and earth moving machinery cannot compare to the Angkorians when it comes to the Cambodian landscape. I looked down on the perfectly straight line of the ancient road now marked by a canal that leads to the vast reservoir of Ang Trapaeng Thmor, now a wildlife sanctuary for the endangered Saurus Crane. We flew over the precarious towers of Prasat Troap, a temple I’ve yet to visit and spied the Angkorian city of Banteay Chma.

A site had been cleared for us in a dried out paddy field with a vague H where we were supposed to land then all became lost in a whirlwind of debris from the powerful downward thrust of the rotor-blades. Cold towels and refreshments at the ready, we were lead off to explore JVII’s second largest stone construction after Angkor Thom at Angkor.

Like Angkor Thom his capitol, the towers are adorned with loksvara thought to be a benign image in his likeness. Ever present ever watching, maybe not so benign as they looked over the scheming Hindu priests during his Buddhist reign.

There was a Hindu temple here before, which became integrated into JVII’s construction. 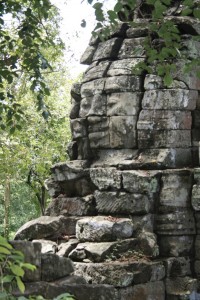 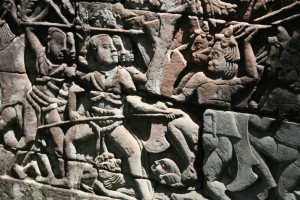 Despite or maybe because of religious dissent the King allowed a secular society to coexist. He also tolerated a central shrine to his son and the four servants who lost their lives on the frontline defending the crown prince from the marauding Cham.

We walked across the causeway and entered the jumble of towers and galleries, engulfed by foliage and blocked by fallen stones adorned with beautiful carvings.

The outer galleries similar to Angkor Thom are carved with bas-reliefs that seem to come to life as you stare, and act out the battles, religious rituals and daily life of twelfth century Angkor.

We needed to cover a fair chunk of the country to reach the next stone city perched on the Thai border. Strung out for nearly a kilometer along the edge of a 500 meter escarpment in The Dangkrek Mountains. The stone edifice faced North to Thailand and looked out South over what were once the vast forests of Cambodia.

Preah Vihear, which in Sanskrit loosely means sacred shrine was built and added to by successive kings but eleventh century Suryavarman I gets most of the credit. A linear construction built on five levels along the cliff edge with the main structure at the highest point. 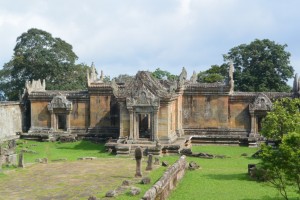 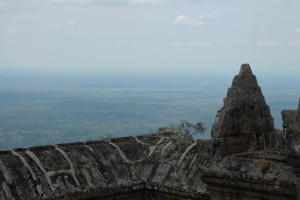 A temple with a view.

We touched down beside our 4WD pick up truck, needed for the incline up the mountain and slowly drove into the clouds. Preah Vihear is Cambodian, UNESCO said so but Thailand disagrees, quite violently in 2008 when the Thais started lobbing shells into Cambodia, which were duly returned.

A market on the North side of the temple where bush meat was bought and sold had Thai soldiers milling around as we climbed up the first set of steps towards the summit and the main sanctuary. The temple is stunning but it’s the view I remember.

A quick beer and we were up again with the surreal mountain top temple behind us heading for the lost city of Koh Ker. Lost because the Varman’s had a falling out over Angkor so JIV in a fit of pique upped sticks and built another capitol of the empire. Cambodia’s second largest temple town with the remnants of more than 180 temples spread over 8000 hectares discovered so far and running since Lidar* surveys have revealed more structures, who’s discovery up until recently was hampered by landmines.

*Lidar is a lazer usually mounted on a helicopter that has been used to map out the topography of archeological sites. 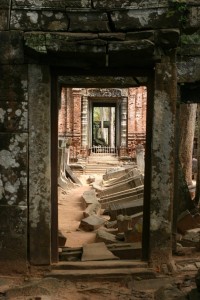 Koh Ker was on a different spoke of the Angkor wheel, which extended via Preah Vihear to Wat Phu in Southern Laos and on to the China Sea. Known as Lingapura or Phallus City, it certainly had some big ones most notably a 4.5 meter statue in Prasat Prang.

The city, which in the early 900‘s had a population of ten thousand is dominated by Prasat Prang, The Pyramid Temple. It rises 35 meters high above the surrounding forest and on a clear day affords views back to the Dangrek Mountains where we’d flown from. 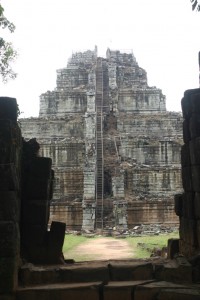 Where there’s a temple there’s a baray or reservoir and Koh Ker has a big one. Rahal as it was called is over a kilometer long and half a kilometer wide. Surrounded by reasonably protected forest there’s a diversity of birdlife and on it’s banks a great place for a picnic. Three stone cities under our belt so a chilled glass of wine and a spread of cold cuts and salad hit the spot.

Today is a travesty, scholars have studied each of these archeological marvels for years and we’re squeezing in four in one day but beggars cant be choosers so its back into the helicopter for another wonder of the world.

Ta Prohm with its twisting tree roots and Beng Melea overgrown with vegetation are described in the guide books as the jungle temples but the real Indiana Jones fantasy is Preah Khan or The Bakan (Kampong Svay District not Angkor).

I first went to Preah Khan on my dirt bike in 2009, a difficult off road journey along forest paths, fording rivers and crossing flooded paddy fields. More recently we’ve turned the trip into an enjoyable if hard mountain bike ride through a forest from BeTreed about 20km away. 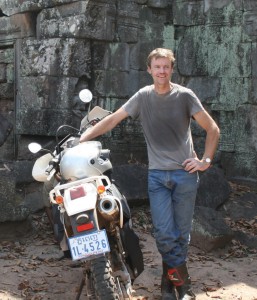 At the entrance to Preah Khan in 2009

Wet with sweat and exhausted from the cycle just imagine what it feels like when there in a jungle clearing ahead of you a stone monument testament to the power of the king towers above. A few hundred meters further and the scale of the city revealed itself.

Preah Khan now represented by many ruins covers about 25 square kilometers and includes a three by half a kilometer baray with an island temple in the middle. The Bakan, bigger than Angkor Wat in area is enclosed by five kilometers of walls surrounded by a moat. Like Banteay Chma much of it is a jumble of stones but more spread out such that a visit feels more like a journey.

Different kings left their mark, Suryavarman I in the 10th century dedicated what he built to Shiva but as with most of the mega temples of Angkor it was JVII who really left his mark with a purpose. 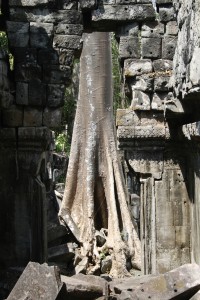 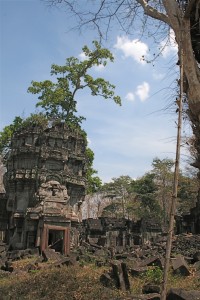 The area around Preah Khan was rich in iron ore and the local Kouy people a distinct indigenous group had learnt how to make iron, necessary for the weapons JVII needed to defeat the Cham who’d occupied Angkor.

Our aircraft had caused the usual excitement with the general populace emerging to watch the big event as the helicopter landed but inside the temple we were left along. Carefully picking our way through the stones contemplating the surrealism of what, for a short time, we were part of.

All too soon we were back in the helicopter flying over a rural landscape of paddy fields and patches of forest. Too much in one day but an awesome experience!