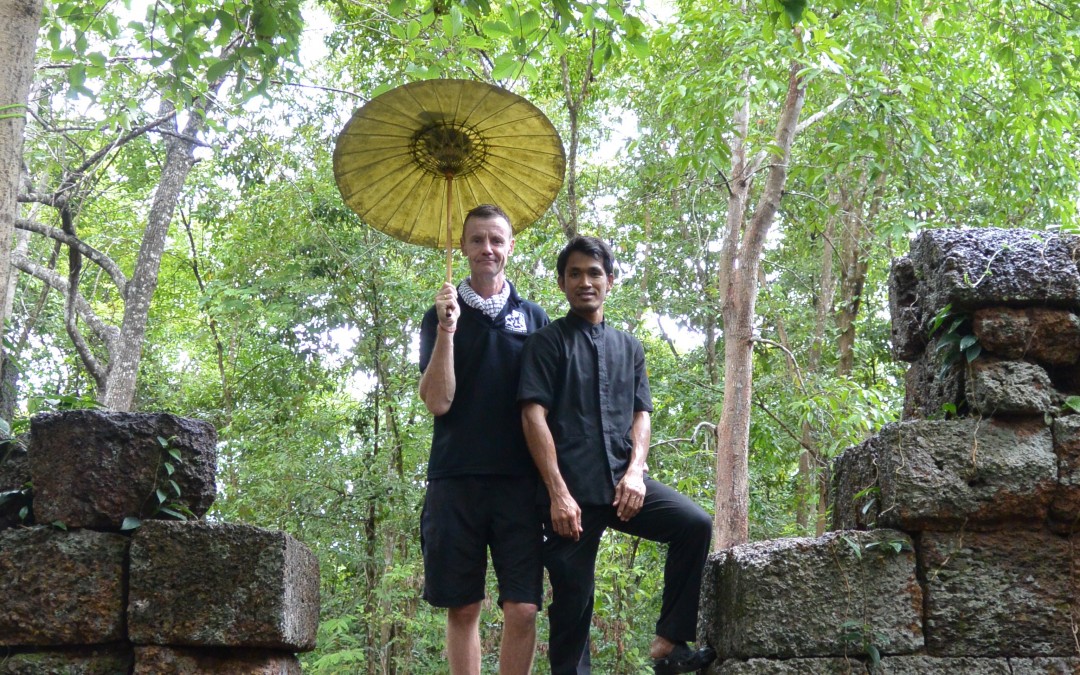 This is the story of a family’s adventures along an ancient Angkorian Highway in search of temples hidden in the forest.

A thousand years ago a canal was dug to ferry the giant blocks of stone that were used to build the temples of Angkor from Kulen Mountain where they were quarried. The canal has long since gone but the road that ran beside remains, now a sandy path for much of the way. 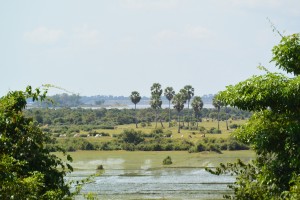 A rural landscape of sugar palm trees and paddy fields

Our mission was to cycle where our families had not gone before, along the buffalo track past bright green paddy fields, between picturesque sugar palm trees and through Khmer villages of wooden houses built on stilts to stand proud of the floods. Children rushed out to get a glimpse of the strange ‘barangs’ (foreigners), shrieking goodbye and hello at random. Boys loosely herded buffalo that gently moved apart to let us through. 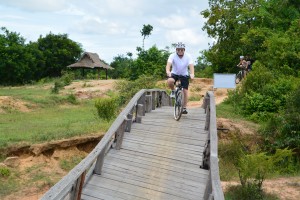 The River Bridge across the Kampong Phluk River

The bridge across the Kampong Phluk River was still strong but the piles had sunk to different depths leaving it twisted like a fairground ride. One by one we cycled across and onto our first stop. A hilltop temple with a pagoda in front constructed of stones looted from the ancient site. The 18 stages of Buddhist hell were graphically depicted on the outer walls. Sinners filed up to receive judgment as to how far they would sink into the eternal flames, which included the novel twist of attaching leeches to the nipples of ‘loose’ women. 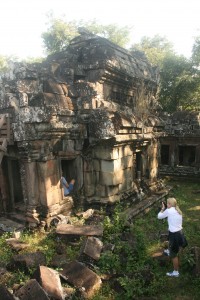 Grey clouds swelled and darkened until too heavy for the sky they fell as torrential rain. We reached the Jeeps just in time and set off for the next stage in our adventure.

Walking single file along the dikes between fields and through forest alongside the old road now flooded from recent rains. We came upon a clearing in the jungle and there lay the ancient ruins of the Tamarind Temple. We were lead through the portals of the Eastern Gate into a courtyard where a gleaming white tablecloth was adorned with flowers and the promise of a delicious lunch. Cold towels to wipe our sweaty brows and chilled coconut water to revive our flagging souls. To complete the cure Tern, in a smart black uniform popped the champagne cork and we toasted our adventure before the gazpacho was served. 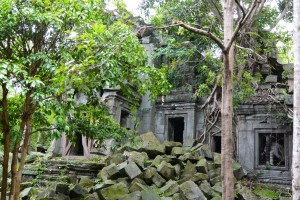 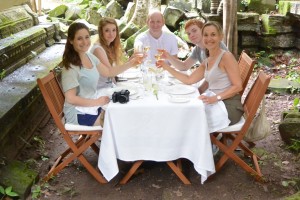 The reward for our morning’s adventures

There are many ways to leave a temple, Uri and I walked. The oxcarts were readied for Beth, Julie, Eve and Brian, cushions laid and tarpaulins hung as we bade them farewell. The sound of whirring rotor blades drowned out the crescendo of cicadas as the helicopter appeared over the tree line and settled onto the field next to the temple. We waved as Danny and Eric took off. Cycling is an option during the dry season and we can always kayak if it gets really wet. 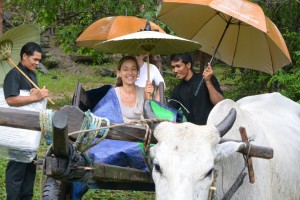 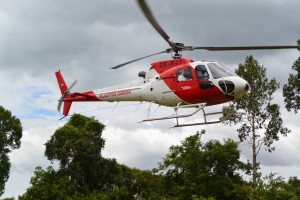 There are many ways to leave a temple including oxcarts (above), helicopters (below) and kayaks if its been raining.

Indochine Adventures in Cambodia organizes bike, hike and simple picnics or champagne lunches in the Tamarind Temple with the different options described to return to Siem Reap.