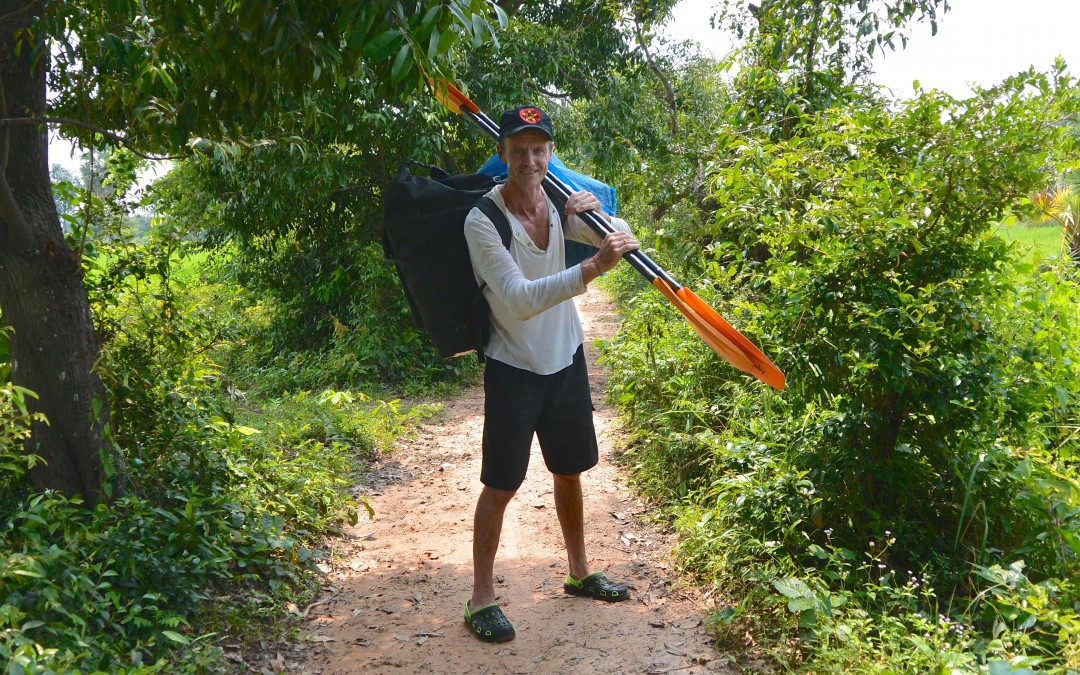 ‘To boldly go where most sane Khmer’s don’t.’

We knew the launch point beside the Angkor Crau Bridge though Sokun (tuktuk driver and Indochineex adventure guide) found it immensely funny that we hadn’t a clue where we were going. 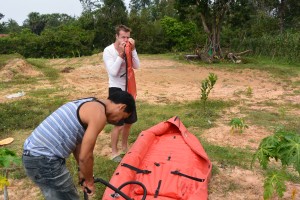 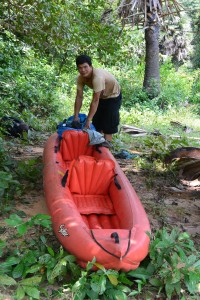 We inflated the kayaks on the banks of a channel that’s just been dug by Apsara. The channel in best Angkorian tradition aims to stop the town from flooding and restore the ancient water systems preventing the foundations of the temples crumbling.

An old man and a couple of children, a smaller than usual crowd attended the assembly of our spaceship and watched as we lifted off or rather splashed down, plonking our bottoms into the kayak, paddling down stream with Puok vaguely in mind.

The river was covered with a patchwork of lotus leaves and intense lilac flowers, the lush green banks were looked over by a few tall trees.

Our first obstacle was a fishing fence right across the channel, which we unhitched. The next low hanging branches, which we pushed our way through to find a straight stretch of water leading to a dam surrounded by quicksand. By the time I’d sunk past my knees I suggested to Buntha we find a different launch point. 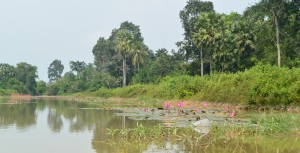 Back on the road or river, easy sailing or paddling to where we reached the plughole, a narrow gap in the banks that funnelled the river flow, directing it to spill in a big mess across the countryside. 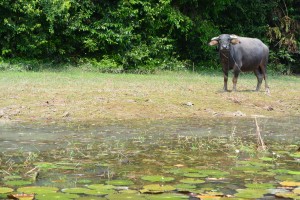 Valiantly we hauled ourselves through the rope like vegetation past flesh ripping rattan thorns and ended up in a leech infested swamp.

I went off to investigate and after 500 m found a small stream presumably heading towards the river, which we had rather carelessly lost at this stage in our expedition.

‘Tow na?’ Buntha asked a passing cowherd. ‘Arrrrgh,’ he was dumb. None the wiser we launched into the stream through a rice field then came to a halt as it too disappeared into impenetrable bush. 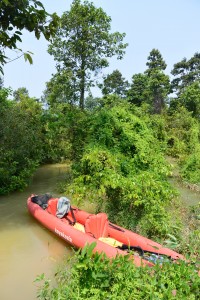 ‘Its all part of the adventure!’ I cried. Buntha looked nonplussed. We packed up the kayak and set off along a lovely sandy path in search of somewhere to paddle. A fringe of forest lay ahead, which in all fairness really should be the Baray, confirmed by a man in a ditch. Our way twisted between stilted wooden houses dishevelled with detail emerging on the road by the Baray.

Sokun where are you?’ ‘I can’t get my tuktuk round.’ ‘Nothing for it Buntha, lets pump up and paddle across.’ I said giving him an over cheerful grin, he responded with a theatrical groan. 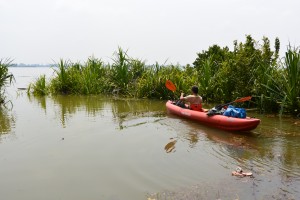 Setting off across the Baray & the South West Corner (below) 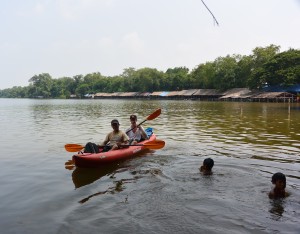 The vast waters of the West Baray stretched into the distance. ‘You said 2km,’ Buntha accused me. ‘2 + 2 + 2,’ I smiled slurping my beer and pulling off a piece of chicken as we swung in our hammocks in the Khmer resort at the South West corner of the Baray just spying the far side where we’d come from. 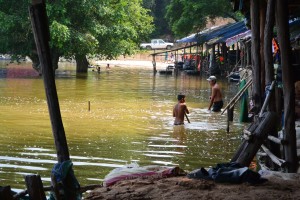 The Khmer Resort on the Baray

Indochine Exploration has cycling and kayaking adventures around the West Baray and Tonle Sap Lake along recce’d routes but we’re happy to explore and get a little lost with guests on foot, by bike and kayak.

*Puok to give some context is a small market town about 15km West of Siem Reap that tends to get overlooked but is a useful cross roads to adventures in all directions.