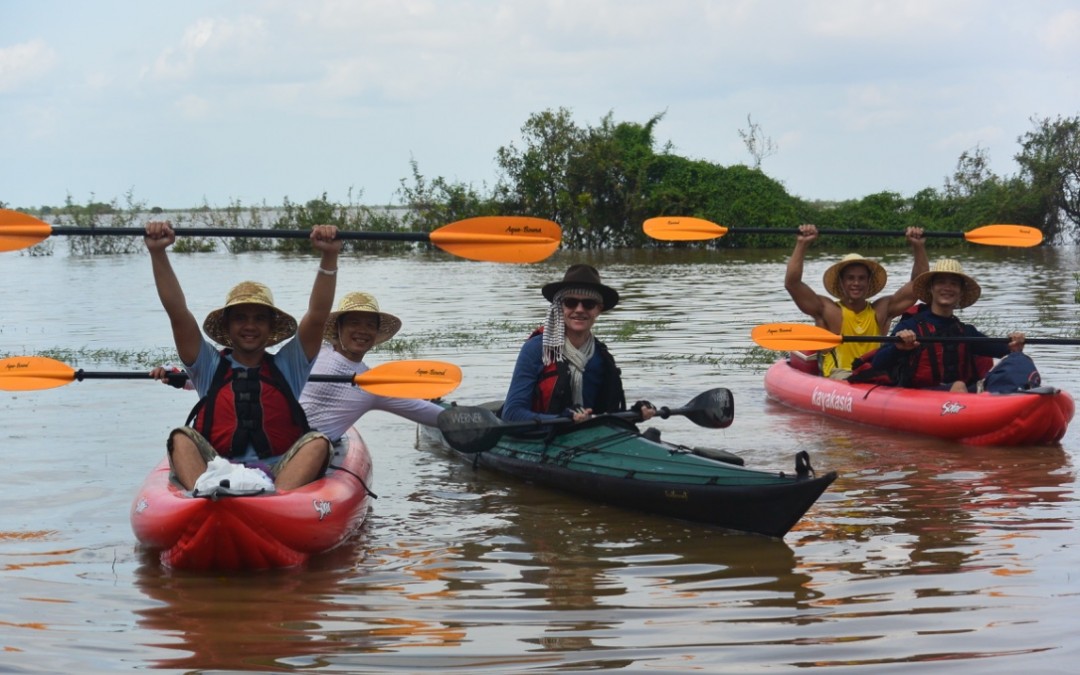 All adventures start with an extra hot latte crafted by Mex at the Little Red Fox Coffee Shop and the morning crew; Jady – temple water management and Darryl the Angkorian historian.

Feathercraft kayak on top of Dy’s electric blue Highlander, Solar kayaks, Lors, Bunthy, Visoth and me inside, another latte then pick up Buntha on the way to the lake.

Our route decided last week when we climbed out of REP Airport on our way to SIN (gapore). Five thousand foot above Phnom Kraum we could see pockets of bush surrounded by a sea of water and not the usual other way round. Direct channels lay clear to the open lake and onto the floating village of Prek Toal.

We launched where the water lapped Phnom Kraum Hill, Bunthy together with Lors, Visoth and Buntha. Laden with dinner and drink, two bladders of wine for the boys and merlot in the cool box for me. 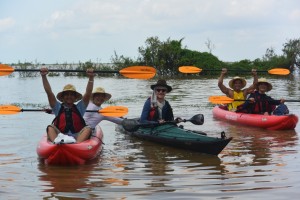 From left to right; Visoth & Buntha, me, Lors and Bunthy

My Werner paddles were so light I barely felt them kissing the water as I effortlessly slid across the lake. The two Solars exploded with muscle like a moon rocket launch then stalled as Bunthy paddled one way and Lors the other. Buntha and Visoth quickly found a rhythm. Fizzing with excitement we set off for Prek Toal.

The lake was not quite so high that we could paddle unimpeded. Lead by lines of vegetation, fishing nets caught in the Solar fins as we zigzagged across the floodplain.

Past midday and Bunthy was running on empty, ‘when are we going to eat?’ He whimpered, while Buntha and Visoth the buffalo paddled on regardless of hunger, fishing lines and fences.

We entered the forest at the edge of the lake and moored to the branches beneath the canopy near the tops of the now submerged trees. We perched on the branches and ate lunch. Lors the gibbon swung from an outlying limb. 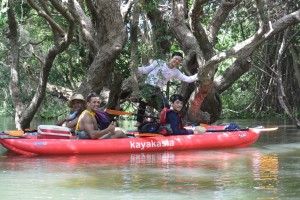 In the canopy forest at the edge of the lake

Climbing down from the tree trunks we made ready for the lake crossing just as the wind died and left barely a ripple on the dull grey expanse of water. The calm made a mockery of my safety briefing. ‘Tie down the equipment, stick together and wear life jackets.’ 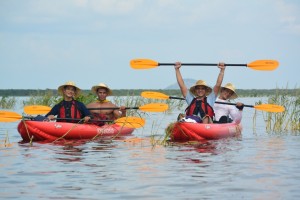 Above and below, Phnom Kraum behind, Prek Toal ahead 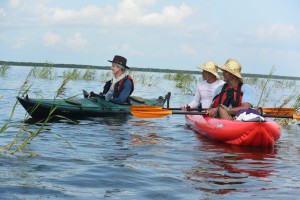 Lors inevitably started the horseplay by sitting up on the cool box at the back of his and Bunthy’s kayak nearly capsizing them both. They couldn’t get a rhythm going but his massive muscles powered through despite their lack of technique.

A huge cloud lay heavy over Prek Toal cumulating and shifting like an upset stomach. All the while darkening until the three telephone masts that marked out the village punctured its nebulous vapour releasing a wind that held us stationary and blew off my Akubra hat.

Bunthy and Lors’s calls for five minute breaks were becoming more frequent and faint as Buntha and Visoth, apparently unfatigued paddled on while I just sort of glided.

The whiffs of decomposing fish from the prahoc platforms and the reverberating staccato of the two stroke long-tail engines reached us before we got to the floating shacks at the edge of the village. We paddled between the more substantial houses buoyed up on clumps of bamboo lining the main channel.

Buntha’s pool hall, floating garden, crocodile cages and Mother in Law’s house lay opposite. ‘Do you want a shower Nick? Buntha asked me. ‘Not in your shit!’ The lake was high so well diluted but the crocodiles and Buntha were defecating on one side of the house while the family bathed on the other. I got back in the kayak and paddled away from the village with a bar of soap, managing to wash myself standing on the branches of a submerged tree.

The boys played pool, I scribbled notes then the family emerged from Mother in Law’s house with our dinner. Bunthy had bought plastic skins of cheap vinegary red wine, I’d put a couple of bottles of Chilean merlot in the cool box, which rapidly disappeared when Buntha found out how much nicer they tasted. We finished dinner. The alcohol combined with the day’s exercise, rounded off by five mg of Valium left me contentedly numbed. I turned off the Mother in Law’s radio lay down next to the crocodiles and fell asleep. 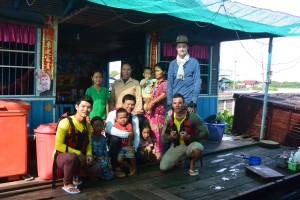 Saying goodbye to Buntha’s Family (excluding the Mother in Law)

A horrific fire had burned for day’s leaving half of the Core Bird Reserve reduced to charcoal. We paddled between the blackened branches saddened. The irrepressible Lors quickly diverted our attention and the presence of any wildlife with the continual noise he emitted.

The fire was an environmental disaster but still the floodplain is a wonderful and alien world of water and blissful quiet, excepting Lors.

Dy was waiting with his ice cold Highlander at Maichrey. It was past noon so rice was the priority. We diverted via the Baray now swollen with rain and a bamboo platform over the water for road kill chicken rice and tamarind paste, a look of total exhaustion on the boy’s faces. It had been fun! 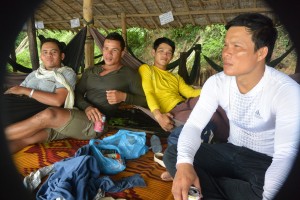 Exhausted waiting for lunch at the West Baray

We are very pleased to take our guests on a day trip by motorboat to the floating village of Prek Toal with an early morning boat journey in the seasonally flooded forests of The Core Bird Reserve. On the return we explore the village by kayak with lunch on a floating platform then paddle to Buntha’s house and meet his family (and crocodiles).

If you have a bit more time an overnight stay means you start to get a glimpse of what life on the lake is really like. And we’d be delighted to paddle with you all the way if you’re up for the challenge!