A Night on Kulen Mountain 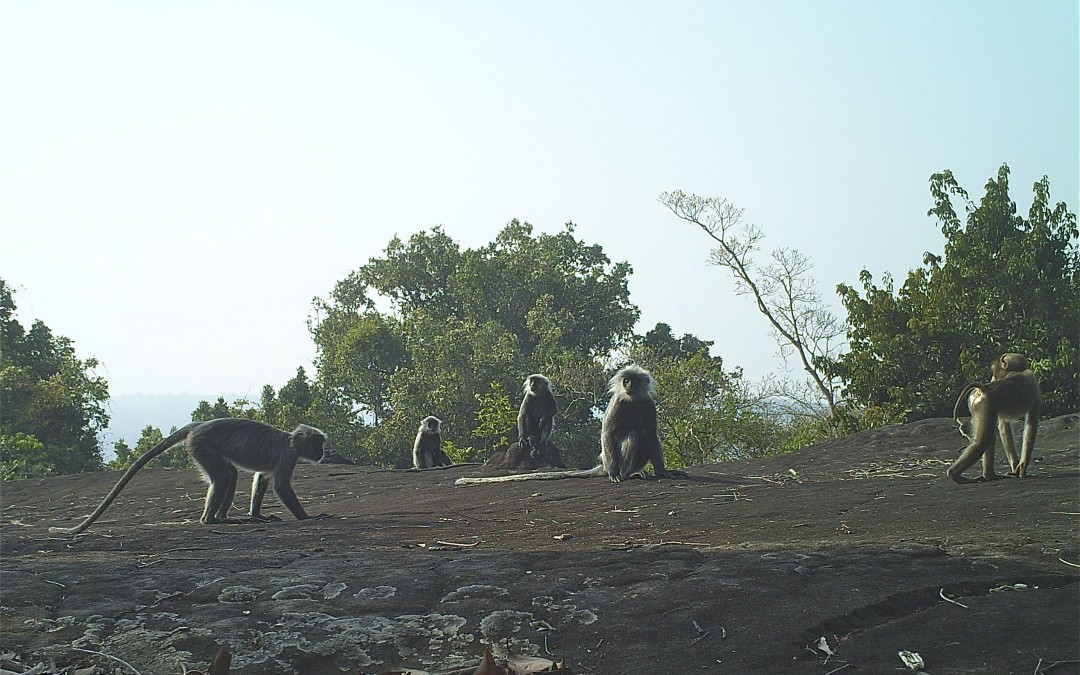 Our quest was to seek out the Silver Langur in the forests of Kulen Mountain and whatever other wildlife came our way.

‘Nick I’ve been to Corbett, Kana and Tadoba in India. The Serengeti, The Okavango, etc in Africa, but I don’t expect much.’ Hmmm – no pressure then, I thought. Kulen’s steeped in historical significance as the birthplace of the Angkorian Empire with some amazing relics hidden in the forest. There is wildlife including the fabled langur but it’s not, I hesitated, quite in the same league. ‘No worries, no worries,’ muttered John, our guest for the adventure.

Our next hurdle was the army who suspiciously studied our van, even a barang (foreigner) couldn’t need that amount of stuff for one day on Kulen, eventually they let us past the toll. Safely ensconced in the ramshackle Ministry of Environment (MoE) HQ, the different strands of expedition started to come together beginning with strong black Vietnamese coffee from the stall opposite. After the usual pfaff we set off, striding through the forest with Mr Nai our MoE ranger and dog, she hadn’t got a name. 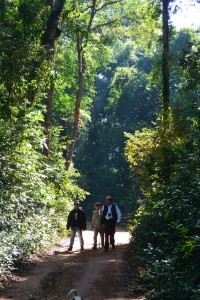 Setting off on The Kulen Trail with Buntha, Nai & John

It was a lovely walk shaded from the sun by the dark green canopies of tall trees still flushed with rain. As we passed Phum Thmei (lit; new village), the stony ground had little moisture so the mixed evergreen gave way to a warmer shade of dry deciduous forest. It was a beautiful morning, the hot sun shining in a blue sky cooled by winds from the North. The humidity had plummeted and sweat vaporised while doing its job.

Dog had stuck with us, prancing with excitement at the slightest whiff of wildlife, which didn’t exactly help our chances of seeing any. She also had a habit of rolling in whatever stagnant liquid we passed by though there was no way she was going near the nice clean cool clear streams we had to cross, so we smelt her presence as well as heard and saw it.

The Sra Domrey was every bit as magical as always. A two-thirds life size elephant carved out of the rock surrounded by three slightly doubtful lions and a distinctly dubious Nandi the bull. 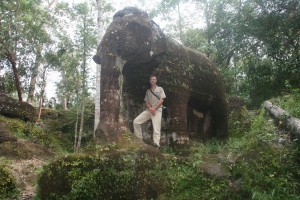 We let the sense of mystical spirituality soak into our souls as we munched Dean’s sobu noodle salad.

Inexplicably the monks beside the bat cave were clad in fake leopard skin as we passed by a little unsure as to the appropriate etiquette for the situation and entered into the dark smelly dampness. Small bats stirred in the powerful beam of my torch and forayed across the kitch gilt of a Buddhist shrine. More kitch in the form of golden Buddhas, silver stupas and white concrete elephants at Wat Preah Kraal, perched on the crest of a hill with views back over the plains of Siem Reap Province to the Tonle Sap Lake.

Downhill all the way to our campsite where Kuong, our van driver and Chomran from the local village had done us proud and chosen a stunning location perfectly placed above the banks of the fast flowing Kulen River. John’s tent was up and a kettle boiling on the campfire. With a sigh of contentment we drank our tea and ate adventure bars.

The water was cool, deep and invigorating after our long walk. As dusk descended dinner was served, a duck casserole courtesy of Miss Wong with vegetables and rice cooked by Chomran followed by fruit salad.

The trees towering above us appeared vast in the dim light. We caught glimpses of a star studded night sky in between the branches. Dog, who was actually very sweet, was still with us but sensing the seriousness of our quest as we set off on a night walk, kept quiet as our torch beams played through the forest in search of it’s tenants. We walked all the way to the Bat Cave keeping our voices to whispers as we anticipated what we might meet. Are there still leopards on Kulen? I thought, but to no avail. 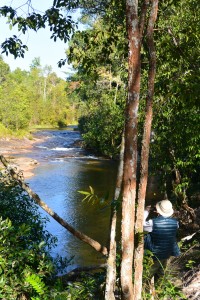 Our Campsite beside the Kulen River

A couple of sleeping birds concluded out watch list. A scratching sound coming from the ground intrigued me until I shone my torch over a troop of termites marching through the leaves. There were spiders of course but no langurs. The forest magical and mysterious at night was reward enough for our efforts.

John could keep his cot and safari tent, my view of the stars shining bright in the clear sky was more than compensation for the slightly strange angle I lay contorted by the hammock and anyway what were Valium for.

The next morning when we woke the coffee was brewed and the table laid. It was a champagne day. We were in no particular hurry, content to eat fruit, sip coffee and watch and listen to the clear water rushing over the rocks below us. 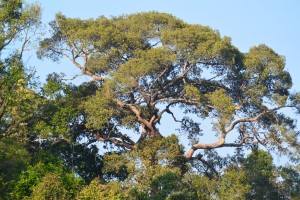 The Langur Trail is a lovely walk, winding its way under a leafy roof many metres above. The Bat Cave marks the beginning of boulder forest, fantastical formations of sandstone the size of houses. One such known as Mushroom Rock afforded views over what appeared as an unbroken wooded valley. Birdsong rang, squirrels barked and insects of every imaginable shape and form fluttered, flew, crouched, quivered and hung but the langurs remained resolutely reclused.

We’d made it back to where we started from, Preah Ang Thom for another cup of muddy Vietnamese coffee and road kill chicken (so named because its flattened to facilitate cooking over the charcoal fire). John went to look at the linga and reclining Buddha with Buntha while I arranged our pick up with Kuong. 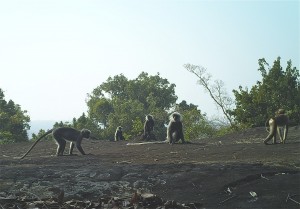 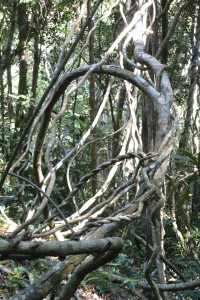 A forest of lianas on the way to Preah Ang Chup

Phnom Kulen was an isolated island until the beginning of this century when the road was built. A set of steep steps up to Preah Ang Chup was the only way up before and now our route on our final leg of the Kulen adventure. The more times I walk the different trails the more identity they assume. One is not like another but it’s beyond my ability to describe the difference. Suffice to say our last 5km was not the same as where we had been before and fuelled our excitement and enthusiasm to the end. Who needs langurs.

Indochine Exploration organises day trips and overnight expeditions (or longer) to experience the forest and its wildlife, including langurs – sometimes. Either on foot or on challenging mountain bike rides. 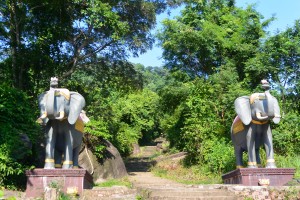 The steps up to Preah Ang Chup, the only entry point to Kulen until early 20th century (compare the current concrete domreys with their Angkorian cousin in the forest)