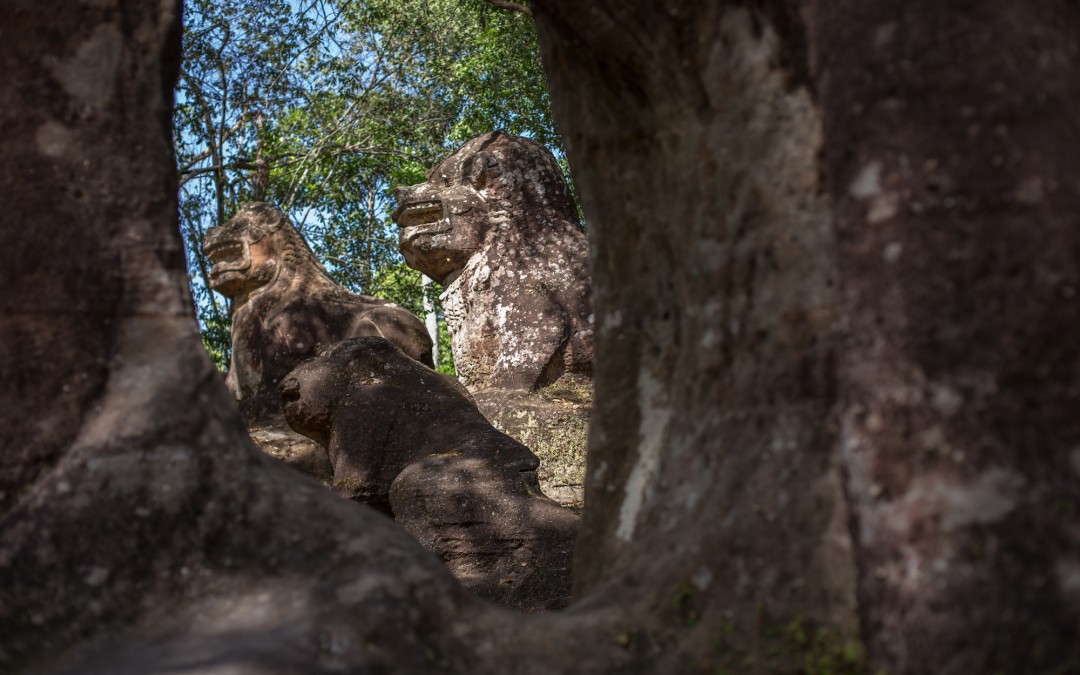 Phnom Kulen lit Kulen Mountain or Mountain of The Lychees is our mountain bike playground, bisected by the Kulen super highway (in fact a red earth road), which climbs the mountain at the Western end. Runs to the central tourist village of Preah Ang Thom and continues to the Eastern escarpment above the town of Svay Leu. It’s crisscrossed by routes across the rocky plateau, forest paths shaded by canopy 10 meters above, sandy tracks that turn instantly to mud whenever it rains and dry trails through the cashew nut plantations.

The plateau was isolated until the end of last century. Floating 500 meters above the Siem Reap plains and still harboring remnants of Khmer Rouge in what must have been thick forest across the 40,000 hectares of hills.

And you’ve got JII (Jayavarman II) and his God delusion that lead to the whole Angkorian business, which inevitably meant a lot of temples that over the centuries got overtaken by jungle.

We follow the main road from Siem Reap to Banteay Srei Temple past the palm sugar sellers who line the way. I admire their optimism of demand for palm sugar. We climb the escarpment and enter a cool green filtered light as trees close branches above the red earth road and shut out the dusty badlands we’ve left behind.

It all started 1200 years ago in the river, where JII crowned himself emperor of the world, as they knew it then. To mark the spot he left a .. 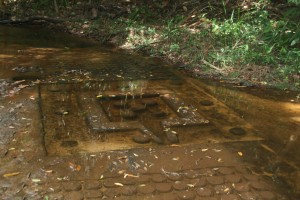 Symbolic phallic symbols carved into the riverbed to ensure the fertility of his reign – and lots of fish. And this being a good Hindu empire the images of Shiva and Vishnu can be made out beneath the glassy waters. A new bridge spans the Kulen River, its easy to miss this magical link to the past – unless you know its there.

A little further and we arrive at a causeway leading up a hill to the Reclining Buddha. A skyscraper size boulder fashioned into an enormous Buddha. A Khmer pilgrimage site where merit is obtained by stuffing 100 riel notes into every stone orifice. 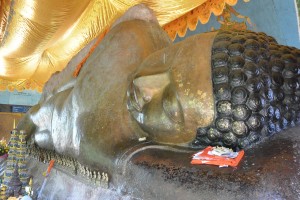 The Ministry of Environment Station is the start for our adventures accompanied by a wired together moto that mechanically shouldn’t work anymore. Mr Pum or whichever ranger is with us for the day has precariously strapped our cool box to his seat and we set off in search of adventure.

The Silver Langur forest butts up to the village. This is where these rare monkeys thought to be gone were rediscovered in 2013.                 The biggest trees on the mountain still penetrate the canopy, sometimes supporting chicken wing beehives hanging from the top most branches.

Squirrels bark and occasionally when the Kulen fruit are falling from the trees we spot a Silver Langur. Always spiders, great black and yellow shelobs spin their webs across our paths waiting to catch a tourist.

I feel for the precarious existence of the little red males clinging to the furthermost silken threads of the web. 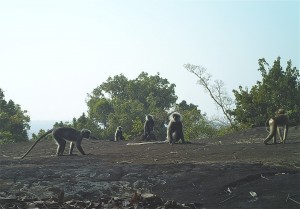 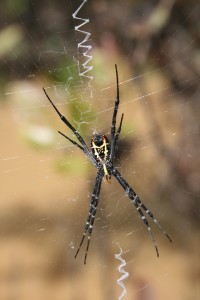 We have trails that climb up to Chomran’s hole, nothing personal just an unusual rock formation containing a Buddhist shrine that Chomran climbs into. And descend through a bat-cave to the Kulen River, where we have lunch. 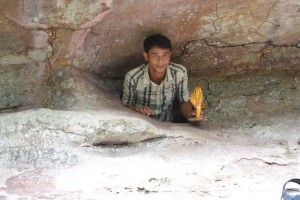 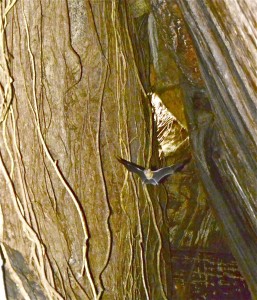 Chomran & his hole and the Bat-cave with a tomb bat

Today we’re slip-sliding through sand on route for Porpel Village and on to Phum Kla Kmum Village for our first temple. It’s a head over handle bar rutted oxcart trail that sort of dwindles to where we walk. 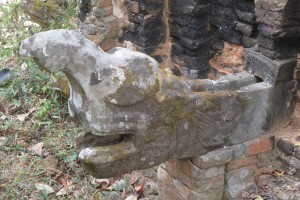 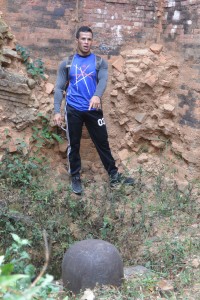 So we leave our bikes and clamber over rocks to a platform above the forest and Prasat Krahom (lit. red temple). There’s a decorated spout or soma-sutra on the outside while inside the temple water falling onto the linga is caught in a yoni (the female part) and fed through the brick walls via the soma-sutra to be collected as holy water fit for a fertility or two.

Today we’re trying out a new trail across the cashew nut plantations to Sangke Leak Village.

Mountain biking on Kulen involves thinking about where your going to cycle and what gear you should be in before you need to change but don’t think too hard or you’ll end in a rut and on your ass. Then there’s the sand, ‘look to the horizon, pedal hard and head straight’. Or shout out expletives, “—-ing sand!” As our guests have been known to do.

Enjoying the scenery after a disagreement with the track

Cambodia was once a big forest and it wasn’t long ago. The majority of forest has gone but the traditional chamkar or slash and burn agriculture remains. A few villagers across thousands of hectares clearing and burning a couple of hectares for small paddy fields was sustainable. Wholesale logging for cashew nut plantations forcing those villages to cut down what’s left is not but lets not spoil a good story. 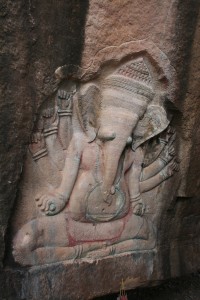 There are not many routes out of or for that matter onto Kulen. Scrambling through the burnt logs and small banana plantations down the steep slopes above Svai Leu Town at the Eastern end of the plateau was one not very good option that has now unfortunately got easier. A logging magnate is dynamiting a road up the mountain for an unknown reason. There’s not enough forest left for the obvious. Nearby are the petroglyphs of Perng Komnou (lit. rock shelter). 9th century engravings of Hindu deities like the Ganesha above chiseled into car sized boulders littered around the base of the hill. The excitement of stumbling across these archeological phenomena is one of the reasons I stay in Cambodia.

Today we turned right and avoided the ominous portent of what the road might bring. Phum Ta Pin, Pum Thma Chruon and Anlong Thom, sandy rutted roads between cashew clearings and through small patches of forest. Not great distances, not great roads and ever changing landscapes equal exciting riding.

Smoky mountain villages with towering coconut palms framing stilted wooden houses, chocolate and tan coated pigs plowing their snouts through the mud and litter. And chickens running for their lives as we ride into the village hungry! 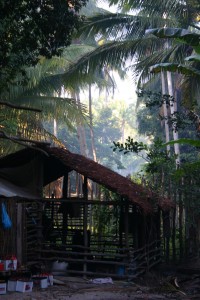 Anlong Thom in the center of Kulen

Anlong Thom feels like the spiritual center of Kulen surrounded by remnants of its lost kingdom, temples that lie not far from the village.

Sweaty, disheveled but bright with the excitement of the ride we moor our bikes in the shade of coconut palms beside the local blacksmith. The cool box is unstrapped from the remains of the moto. Cold beer is served.

We wait while the lady catches one of those unfortunate chickens or a fish from the stream that runs at the bottom of the village and lunch is served. 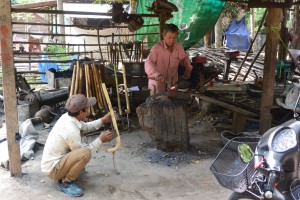 The big wooden houses tell of a time when the forest canopy was raised by massive trees providing abundant timber. Lifting your room above the ground stops the rats that eat the insects and the snakes that eat them. Motorbikes, cows and timber are secure in the space underneath. Fires were lit to provide a rudimentary if risky heating system when the world was a little cooler.

We head out through the cashew that surrounds the village to the islands of forest (protected by Apsara the temple authority) hiding the ruins we’re searching for. Ok we’ve done it before but today we’re connecting a loop across the mountain. The first stop is the single brick tower of Prasat Thma Dap (below). 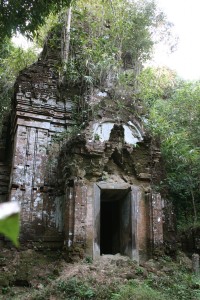 We cross the dam of what the 2013 Lidar survey revealed to be an Angkorian reservoir. Lidar is a laser strapped to a helicopter that records the topography of the terrain. Data fed through a supporting app strips away the vegetation to show the underlying structures of what was a conurbation 1200 years ago. No new Angkor Wat as the press stated at the time but just as astonishing.

Next are the three brick towers of Prasat Domrey Krab, lit. Temple of the kneeling elephant (left), and a short walk away Perng O Eisei (below). 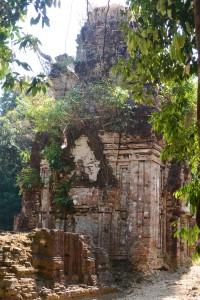 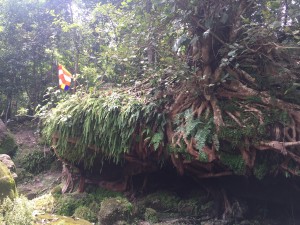 A mysterious and shady hollow, once the home of a hermit, a small spring forms a clear pool with a rock fashioned into a turtle. A stone doorway carved into a boulder is flanked on either side by an Apsara or celestial being.

There’s the sense that the king might not be far away. 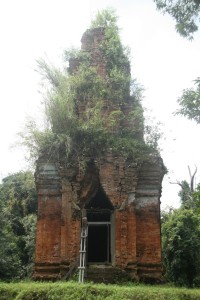 The 10m high brick tower of Prasat O Pong (above) and the pyramid temple of Rorng Chen are not far away. The latter sits on top of a small hill or is a small hill. We could make out the blocks of laterite that form its base but not much else. This was where JII hung out i.e. his palace.

The temples are not far apart but it’s easy to get lost hence the accompanying decrepit moto though of course its main function is to bring cold beer.

Perng Tbal is a first. Tbal means pestle and Perng carving. We didn’t see any carved pestles but a lot gets lost in translation.

A gully between great slabs of stone, not sinister but not explained, a space in a time of its own. 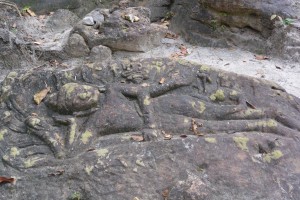 Another turn in the forest will take you to the kitch Wat Preah Kral. A working pagoda where the wealthy buy their way to heaven via silver and gold stupas perched across the bare rock face. I reclined in Buddha’s chair to view Phnom Bok and on a clear day the Tonle Sap Lake. I sat on his carpet and looked at these strange rock formations. Today we carried on to The Srah Domrey, the most wonderful element of Kulen.

I can remember the hairs on the back of my neck electrified as I first caught sight of this two-thirds life size statue. In those ancient days eleven years ago when I first came to Cambodia there were few visitors to this exceptional place, relative to the swarming hoards that descend on Angkor, there’s not many that make it here now. 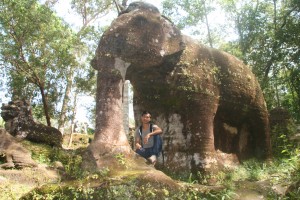 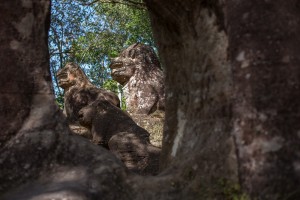 The Sra Domrey above and 3 stone lions seen through its legs.

The story finishes 10 kilometers away at Preah Ang Thom where it started. The mixed evergreen forest around the magical elephant gives way to dry dipteropcarp trees growing out of the rock. The cycle past the village of Phum Thmei and over the bridge across the delightful Kulen mountain stream, where we once swam in its cool pools. Then we’re back in Preah Ang Thom and the hiss of a cold can of beer as I pull the tab. A fitting end to another Kulen adventure.