A Family Get Together 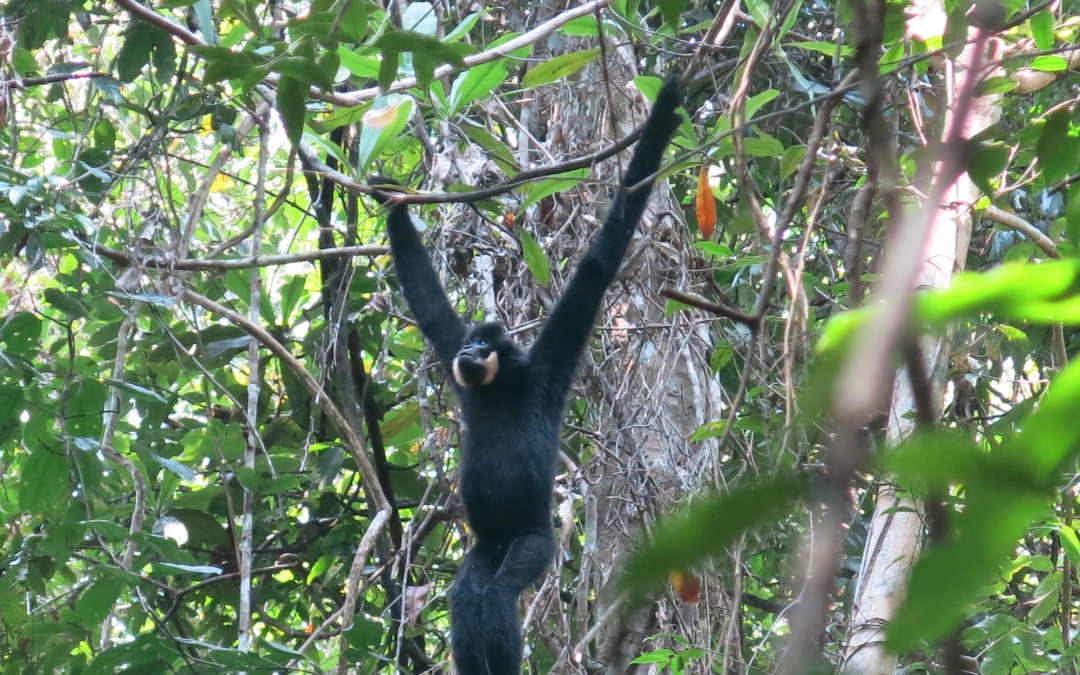 An Audience with a Northern Buff Cheeked Crested Gibbon

Etiquette is important in the ape world, or are they monkeys? It all depends on how long the arms are – long, so apes like us, which makes us relatives and our meeting a family call.

We invited the Northern …. Lets say NBCCG’s to visit us in Siem Reap and in days gone by when the North of Cambodia was covered in forest, they would have obliged and swung their way across the country, the slight issue of the Mekong River aside. The patches of trees left are barely enough to sustain a soaring stork so we were on our way via said Mekong to The Terres Rouge Lodge in Banlung. 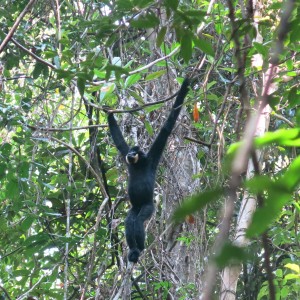 We opened the car doors to delicious cool and colonial charm of The Terres Rouge Lodge beside Banlung Lake.

Jammy from Red Parrot tours was waiting at his restaurant The Green Carrot. It might have been the other way round. A true entrepreneur he was advertising the unique selling point of his company, which was apparently a free toilet. He’d made a laminate sheet with an explicit cartoon of a man doing his business under a double decker bus. 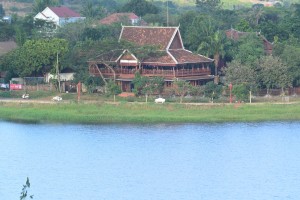 The Terres Rouge Lodge in the old Governors building

There was an adventure to be planned over the red wine and fish oops beer and chicken, a boat up the Sesan River and a trek to a waterfall, an indigenous cemetery then a motorbike ride to the edge of our cousins territory.

The morning light over the lake was a delight as we drank our Khmer coffee and waited for Naven. A smooth red earth road headed North as it descended into the Sesan floodplain and Kchang village where Sresh our boatman and guide for the day’s adventure was waiting for us.

We brushed aside some confusion as to what we were doing, with what and who and boarded Sresh’s narrow wooden long tail. A step up from the usual Sesan river craft as we sat on a dry mat not in the customary half inch of sludge.

Blurred blue hills fringed the horizon as we sped upstream past clumps of stilted houses nestling under shade trees. Ferry’s traversed the river while the inevitable sound of chainsaws reverberated across the water. Our boatman was emerging as Sresh our guide. Clad in not much more than rags hanging off his skinny frame, we found that he’d taught himself rudimentary English when he answered our questions in a gentle toned timbre.

Note; The day’s adventure was an adjunct to our appointment with the cousins as they were busy entertaining Lucky Carrot guests today. 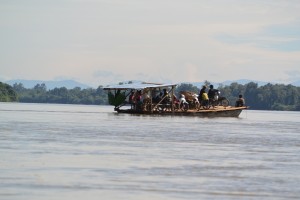 Ferry across The Sesan

Sresh strode ahead in Wellington boots and ripped tracksuit bottoms. Jady and Naven reminisced on the biodiversity workshops they’d attended, while I hobbled behind on a dodgy hip. A cashew nut grove, a cow field then into the open dry deciduous forest with a picture post card view of a village spied through the trees. Bright green paddy fields surrounded thatched roof huts.

We wound our way up a rocky path and spotted a lump of dried turd. ‘Hmm?’ Said Jady, and ‘take a photo,’ ‘a new species?’ Perhaps a serow we mused. ‘Another photo,’ Jady pointed to an orchid implanted on a tree trunk. Our route descended into a riparian forest of bamboo. Sresh hacked at a stem and fashioned a cup, which he gave to me. I was a little crestfallen when the others got one too. 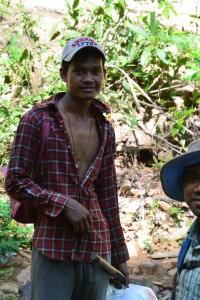 Sresh (below) and an orchid (above) 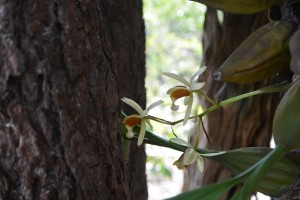 A beautiful walk beside a stream to where a waterfall fell out of the forest a level above. Cascades of spume enshrined the rock face and fell into an oval pool. We needed no invitation to plunge into the cool clear water. Draping ourselves over the warm black rocks, contentedly munching ham and baguettes while staring at the hypnotic diamond droplets of exploding water.

Back on board Sresh’s long tail our next stop was a gloomy tribal graveyard shaded by tall trees. Huts adorned with brightly painted 2D ships for the journey ahead or the one past. A man with shades and woman with boobs stood guard to keep an eye on an electric fan in case it got hot. Empty beer cans, you can get 50 Riel for the aluminum and mummified rice, which lasts forever. 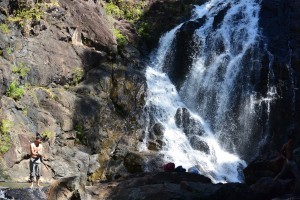 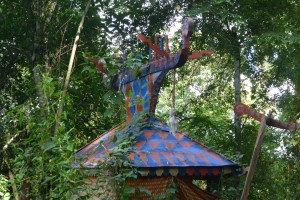 The English speaking guides (that didn’t) including the handsome Noi were waiting for us at Veunsai to take us to the CI Station. Jady and I would have probably preferred to go back to The Banlung Lodge but we had an appointment to keep so we duly sat aside the beaten up old bikes, dangled our legs as there were no foot rests and squeezed the driver in my case Noi, with my thighs.

An earthmover had cleared the way and bulldozed the trees a year before which meant the road was deeply rutted and bereft of shade but interesting enough. At ITub Village we turned off to cross a marsh leaving us wading through the wetland to rejoin our bikes before the forest. Chamkar or slash and burn agriculture aside the trees became taller and our route easier under the canopy.

A crude wooden bridge crossed the river beside the station and on the other side a fenced compound of tall timbered buildings where we’d stay the night. A pleasant evening with Jady and cold beer, chatting with Noi the handsome (did I say that before) English speaking guide who tried but didn’t. There was a fan in my room until 9 when the generator was turned off but rain had cooled the evening and it felt good to be in the middle of the forest sipping whisky and listening to In The Psychiatrists Chair in the dark. 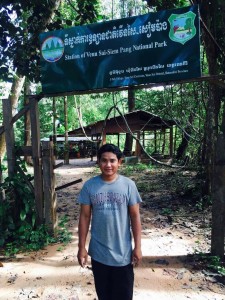 6 hours later I was fumbling in the dark to find my phone and a light. I stumbled to the deserted kitchen shack and managed to light the gas for a cup of tea. Growled at Naven coz no one was awake then hobbled off through the mud in the pitch black following a ranger who seemed unaware I was there.

Note that although priority No 1 was to meet the family we’d also hope that the process of getting there would be up to the Albino standard, it wasn’t.

Grumpy by default at 5am in the morning I blundered on behind. So what if I got lost, well that would be their fault! Jady hung back to make sure I didn’t and as the predawn glow penetrated the trees my mood lifted with the mist. 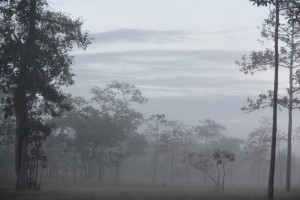 Dawn at the edge of the forest

We’d agreed that the NBCCG’s would call leading us to their front door but damp from the night’s rain they were taking longer over their toilet than usual. We set off into the forest anyway in the hope of meeting at a favorite breakfast spot. Pockets of idyll remain and this was one of them. Like a priest in a cathedral our Gibbon conducted the service from his pulpit 10 meters above.

Sarah, a phd researcher and Naven referred to him as JII, which meant he’d built Angkor Wat. We could just make his buff cheeks (this is an objective statement). A little further and the female was spotted followed by 3 juveniles. Our breakfast was waiting on a crude table beside the trees though we’d have killed for a cup of coffee. 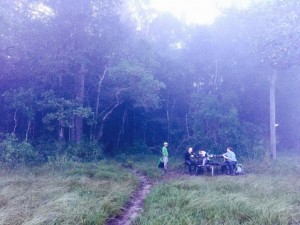 Breakfast at the edge of the forest

I said goodbye to Noi regretting he wasn’t my motorbike driver for the journey our through the swamps to Veunsai. The Sesan Ferry where the ferryman knocked a motorbike into the river and Dy on the other side for the drive to Banlung. One night and a big adventure felt like a lifetime as I hobbled around the spread out streets of the town.