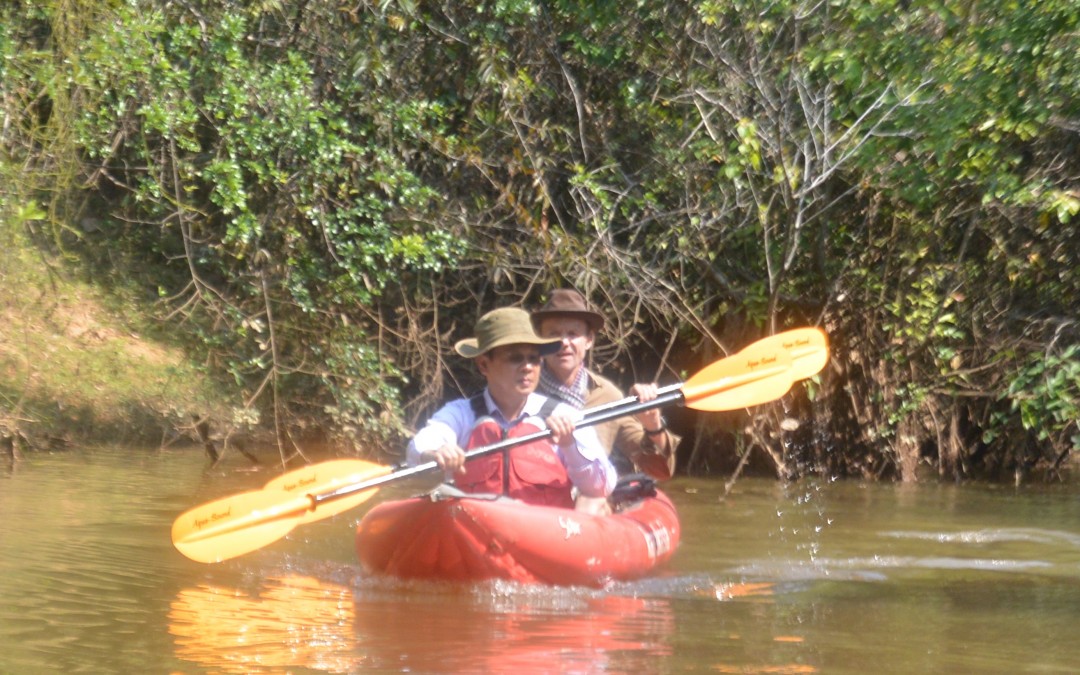 The rise and fall of the Angkorian Empire, which lasted nearly 600 years from the 9thto the 14th century, was centered in what is now Siem Reap Province, around its greatest religious monument Angkor Wat. The metropolis of Angkor comprising nearly a million people covered a thousand square kilometers servicing what remained the largest city in the world until London eclipsed it seven hundred years later. 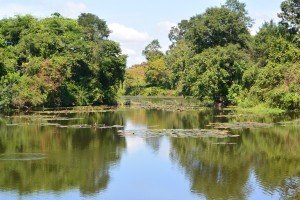 Angkor Thom Moat, one of the great waterways that maintained ground water below the temple and prevented subsidence

Key to the success of the civilization was the management of water in a region of inundation and drought. An elaborate system of canals and barays or reservoirs channeled water from the Kulen Hills to the North into the city bringing food security in the form of rice and flood mitigation during the monsoon.

The availability of water ensured that food went in and shit went out. Canals facilitated the construction of the temples conveying the stone from the quarries to the North. And the temples were built with defensive moats that maintained ground water levels preventing subsidence (as well as looking pretty). 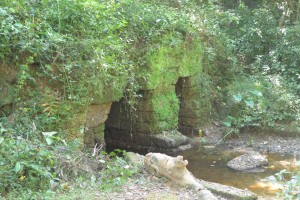 Runta Dev, the tunnel under the 8m high walls of Angkor Thom that channeled waste-water out of the city into the moat

Just as water was the key to the empire’s success it is now thought to be instrumental in its decline. Not long after the death of the great king JVII in 1218 the kingdom was hit with a double whammy. First 30 years of drought followed by exceptional floods, which washed away the elaborate and sophisticated water management system that JVII in particular had built.

In recent years the importance of these systems has been recognized again as the massive increase in tourism has lead to ground water levels falling and the potential collapse of the temples. It is no coincidence that the best preserved are those with functioning moats.

One man has been championing the restoration of the Angkorian water management. His excellency Hang Peou now Director General of Apsara, the authority responsible for managing the UNESCO world heritage site, has overseen the construction of canals that channel the Siem Reap River into the North Baray, the moats of Preah Khan, Ankgor Thom and even Angkor Wat. Reducing the possibility of Siem Reap flooding as it did in 2011. And maintaining the ground water levels that prevent subsidence of the temples. 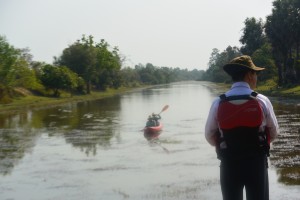 Peou overseeing our progress up the North Baray Channel

These small matters aside obviously the most important function of Angkorian hydrology is to allow us to paddle through the Angkor Park, Cambodia’s best preserved 400 km2 of lowland mixed evergreen and deciduous forest. 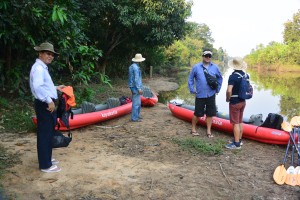 Peou and Jady with Buntha contemplating our adventure

And so it was one Monday morning that Peou, then Director of Water Management at Apsara, facilitated by Jady, a consultant working with Apsara together with Buntha and myself kayaked through the heart of the Angkor Park. Jady and I had previously recce’d Peou’s canal so this time we didn’t get lost and anyway Peou knew the way, but – we hadn’t followed the river as it heads South to the city.

The current had cut deep into the soft ground leaving 7meter high banks that we had to scramble down with our kayaks and then awkwardly get in them*.

*Evidence of the destruction of JVII’s waterworks as floods washed away his canals and gouged deep scars through Angkor. 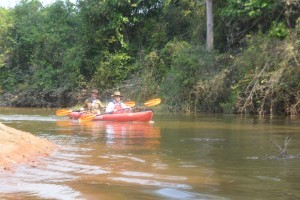 Paddling down the Siem Reap River

A few fallen branches had accumulated enough flotsam and jetsam to block the river with no way through but a messy scramble. Jady and Buntha paved the way. Poeu and I made it easy.

There are 700 Angkorian structures inside the Angkor Park but only 180 of them can be called temples, they’re the ones with moats. These monumental stone edifices need solid ground for their structural integrity, without it they crumble to a pile of stones. Siem Reap is a built on a light sandy soil, water gives it substance, which is what the moats do for the temples.

A few hundred meters on either side there were no doubt bus loads of Asian tourists but here in the heart of Angkor we paddled passed explosions of bamboo erupting on either side. White-collared Kingfishers taunted Buntha to catch a photo. A Snake Eagle followed our progress from above, while a Shikra watched us with disinterest from a fallen branch. All manner of other birds sang from the trees on either side obliterating any thoughts of tourists or even other people.

We’d catered for 5 pax kayaking but one of the water management guys came along for the ride so the third kayak was one paddle power short and we had visions of Kosal, Jady’s assistant unable to move his shoulders for a month or 2. They’d had the sense to share the work and caught up beaming and claiming the big adventure.

Our driver had accumulated helpers by the time we reached the sluice gates at the French Bridge (confusingly built by Americans), who pulled us up the steep stairs to Peou and Jady’s vehicles.

It took a while to sink in that we had paddled through one of the wonders of the world, visited by 3 million people but seen none, instead thick riparian forest as if we were discovering it for the first time.